Moscow is ready to pay off its debts, but half of the nation’s forex reserves are frozen abroad 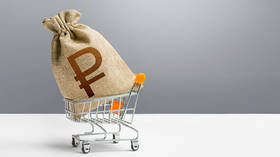 Washington and its allies want to push Russia into an “artificial default” by making it impossible to pay off the country’s foreign debts despite having the money to do so, Finance Minister Anton Siluanov said on Monday.

“The freezing of foreign currency accounts of the Bank of Russia and of the Russian government can be regarded as the desire of a number of foreign countries to engineer an artificial default which has no real economic grounds,”the minister said.

The latest wave of Western sanctions over the crisis in Ukraine targeted Russia’s banking and financial sectors, with nearly half of the country’s foreign currency reserves, worth $300 billion, frozen by foreign central banks.

Russia is due to pay $117 million on two of its dollar-denominated bonds on Wednesday. Siluanov says the country is able to meet its debt obligations and will pay the debt using the national currency – the ruble.

“Claims that Russia cannot fulfil its sovereign debt obligations are untrue,” he said. “We have the necessary funds to service our obligations.”

Last week, international ratings agency Fitch cut Russia’s sovereign debt rating further into junk territory, saying that a default is “imminent.” Meanwhile, the International Monetary Fund warned that a Russian debt default is no longer an “improbable event,” stressing that Moscow has a lot of money it can no longer use.