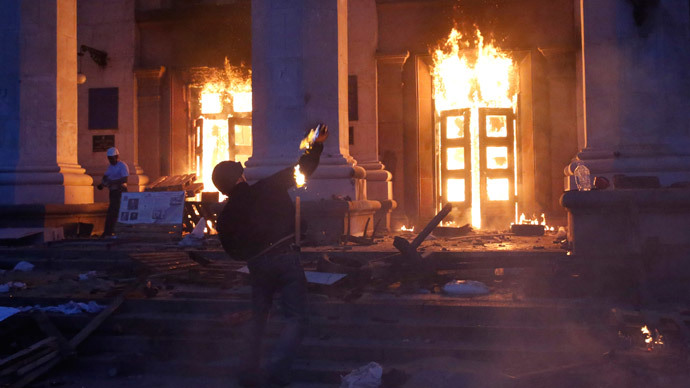 A protester throws a petrol bomb at the trade union building in Odessa May 2, 2014.(Reuters / Yevgeny Volokin)  © Reuters

Despite desperate calls from witnesses, Odessa fire brigades came to the scene of the notorious Trade Unions House blaze only 38 minutes after it was reported, leaked transcripts of emergency calls show. The fire claimed the lives of 48 people in May.

The leaked transcripts involve calls which local emergency services reportedly received on the evening of May 2.

The fire began after violent clashes erupted between rival rallies of anti-government protesters and radicals supporting the Maidan-imposed authorities in Kiev. Tires, a protesters’ tent camp and the Trade Unions House – which had anti-Kiev activists inside – were set ablaze.

According to documents obtained by Odessa news website dumskaya.net, the first calls from activists were received at 7:31 p.m. local time.

“Hello, come to the Kulikovo field now, tents are on fire, it [the fire] is getting close to a building,” a caller said.

“I am not sure but you probably know that there is a fire at Kulikovo field,” a caller said. “All of what is burning is in open area, does not threat anything,” the dispatcher responds. The caller then insists that the fire should still be put out.

At the same time, a call about the fire near the city’s Trade Unions House was received from a police officer.

Between 7:36 and 7:43, the rescue service received four phone calls reporting the fire.

“A building at Kulikovo field is on fire, why aren’t you coming?” a caller asked at 7:48. “They are coming, coming,” the dispatcher responded. “Ok, are you waiting till it burns down?” the caller said

Another 12 calls were received within the next 10 minutes.

“Hello, this building has been on fire for 15 minutes now. Is anyone coming or not?” a caller said.

The transcript shows that the first order to “send one unit to Kulikovo” was made at 7:56 – 25 minutes after dispatchers received the first call, when only tents had been set ablaze.

“Yes, they are,” dispatcher said.

“But we will burn down now,” said the caller. A note in brackets says the person calling was sobbing.

Ten minutes later, local police made another call, because firefighter units had not arrived.

“Tell us, police head is asking already, where are cars? (yells) Where are cars? You said they were coming 20 minutes ago. We are calling you, but neither of the cars have come.”

The dispatcher claimed it sent rescue units as soon as “the order was given.” 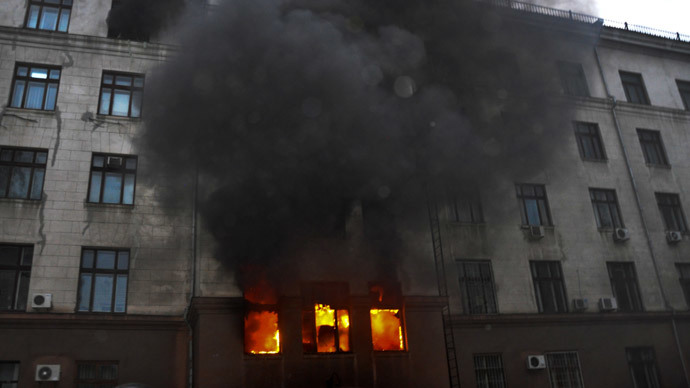 The document says it took a firefighter brigade 13 minutes to come to the scene after receiving the order, and 38 minutes after the first caller reported about the fire outside the Trade Unions House at 7:31. The first brigade arrived at 8:09, according to the transcript.

A water tank truck was dispatched at 8:16 – eight minutes after the order was given, and six minutes after leaving the station. Ten minutes later, emergency stairs were driven to the burning building. Additional rescue units were dispatched in the next 40 minutes.

Shortly after the tragedy, the head of Odessa’s emergency services department, Vladimir Bodelan, was dismissed from his position. Bodelan led the entire operation to combat the fire and was blamed for the unsatisfactory work of rescuers, who did not rush to the scene immediately after being called. The media criticized authorities for not responding on time, even though the nearest fire station was just 300 meters away from the Trade Unions House.

According to Bodelan, the fire brigades “that arrived at the siteon time” could not begin putting out the fire “because the attackers were shooting and resisting.”

“I was forced to negotiate with activists, who looked to me as heads of fighter units, that we could work calmly,” he said back in May.

Earlier, Bodelan repeatedly said that the first call his brigades received was at 7:45. However, the leaked document, which Bodelan allegedly signed himself, shows that it was 14 minutes earlier – at 7:31.

As a result of the fire at the Odessa Trade Unions House, 48 people were killed and 247 others injured. After the fire, Bodelan said he “cannot explain why they were having such trouble breathing” and suspected it was not “because of the smoke caused by the fire.”

On July 28, the Odessa City Court ruled to restore Vladimir Bodelan as the head of the state service for emergencies in the Odessa region.