Ukraine compares itself to Nazi Germany

Ukraine’s parliament on Wednesday appealed again to the West to impose a “no-fly zone” over the country. However, the parliament raised eyebrows online by comparing the devastation suffered by its cities to that suffered by Nazi Germany during Allied bombing raids. The bizarre choice of comparison is the latest Nazi-related statement to come out of Kiev.

An image posted to Twitter by Ukraine’s ‘Verkhovna Rada’ (Parliament) portrays a bombed out building in Hamburg in 1943 alongside similar damage to the Ukrainian city of Kharkov in 2022.

The text above the image reads “When the Sky is Open,” and a message in English demands that the West “#CloseTheSky over Ukraine.” 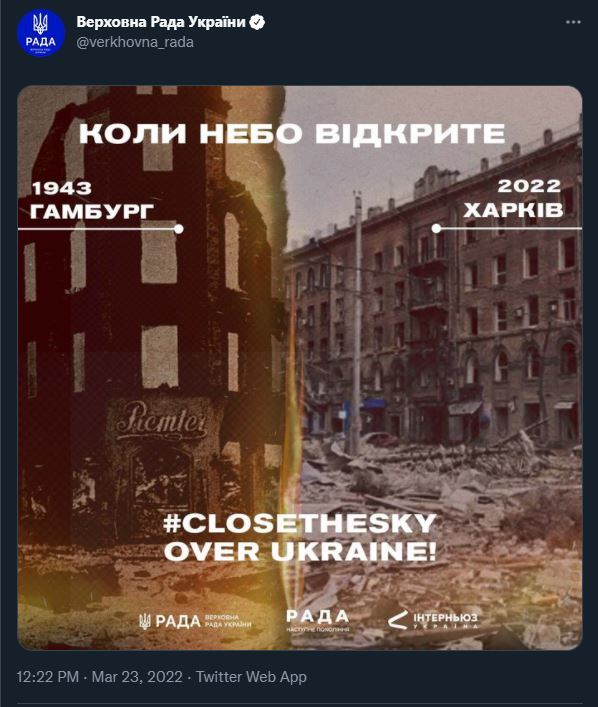 “Close The Sky” is a reference to the possibility of a NATO-imposed ‘no-fly zone’ over Ukraine, a step Kiev has demanded but leaders in Washington and Brussels have thus far refused to take. It would involve NATO committing to shooting down Russian aircraft over Ukraine, a step that would bring the alliance into open war with Russia and, in the words of US President Joe Biden, lead to “a third world war.”

Bizarrely, the image shared by the parliament asks the same allies that bombed Hamburg in 1943 to fight on Ukraine’s behalf today. The Rada did not explain why it chose to compare Kharkov with Hamburg, especially considering the fact that Kharkov itself was bombed by Germany during the Second World War, which would have made for a comparison that wouldn’t involve comparing Ukraine with Nazi Germany.

The analogy drew some puzzled comments online. “You aren’t supposed to compare yourselves to Nazis in public,” one commenter joked. “Man, they really don’t know what optics are,” another quipped.

Russian President Vladimir Putin has accused the Ukrainian government of harboring sympathies to Nazi Germany, and in a speech announcing the start of Russia’s military offensive on Ukraine last month, he said that one of Russia’s goals was to “denazify” the country.

Aside from integrating the neo-Nazi ‘Azov’ batallion into its military, the Ukrainian government has launched efforts to portray its people as racially distinct from Russians, whom politicians in Kiev have openly referred to as “orcs.”

Nazi collaborator Stepan Bandera is considered a hero to Ukrainian nationalists, and just last week a television host in Ukraine, Fahruddin Sharafmal, caused controversy when he approvingly quoted Nazi war criminal Adolf Eichmann in calling for the murder of Russians and their children.