Russia presents new evidence on Ukraine biolabs, comments on links to Biden and US

The Russian military has presented documents showing Ukraine’s interest in using drones to deliver weaponized pathogens developed in US-funded biolabs. Names of US officials involved in the biolabs projects, and the role the current US president’s son played in the program, were also made public during the special briefing on Thursday.

One of the key pieces of evidence was a letter from the Ukrainian company Motor Sich to the  Turkish drone manufacturer Baykar Makina – makers of the Bayraktar TB2 and Akinci UAVs – dated December 15, 2021. The Ukrainians specifically asked if the drones could carry 20 liters of aerosolized payload to a range of 300 kilometers – putting them in range of a dozen major Russian cities and almost all of Belarus.

“We are talking about the development by the Kiev regime of technical means of delivery and use of biological weapons with the possibility of their use against the Russian Federation,” said Lieutenant General Igor Kirillov, commander of the Russian Nuclear, Biological and Chemical Protection Forces. 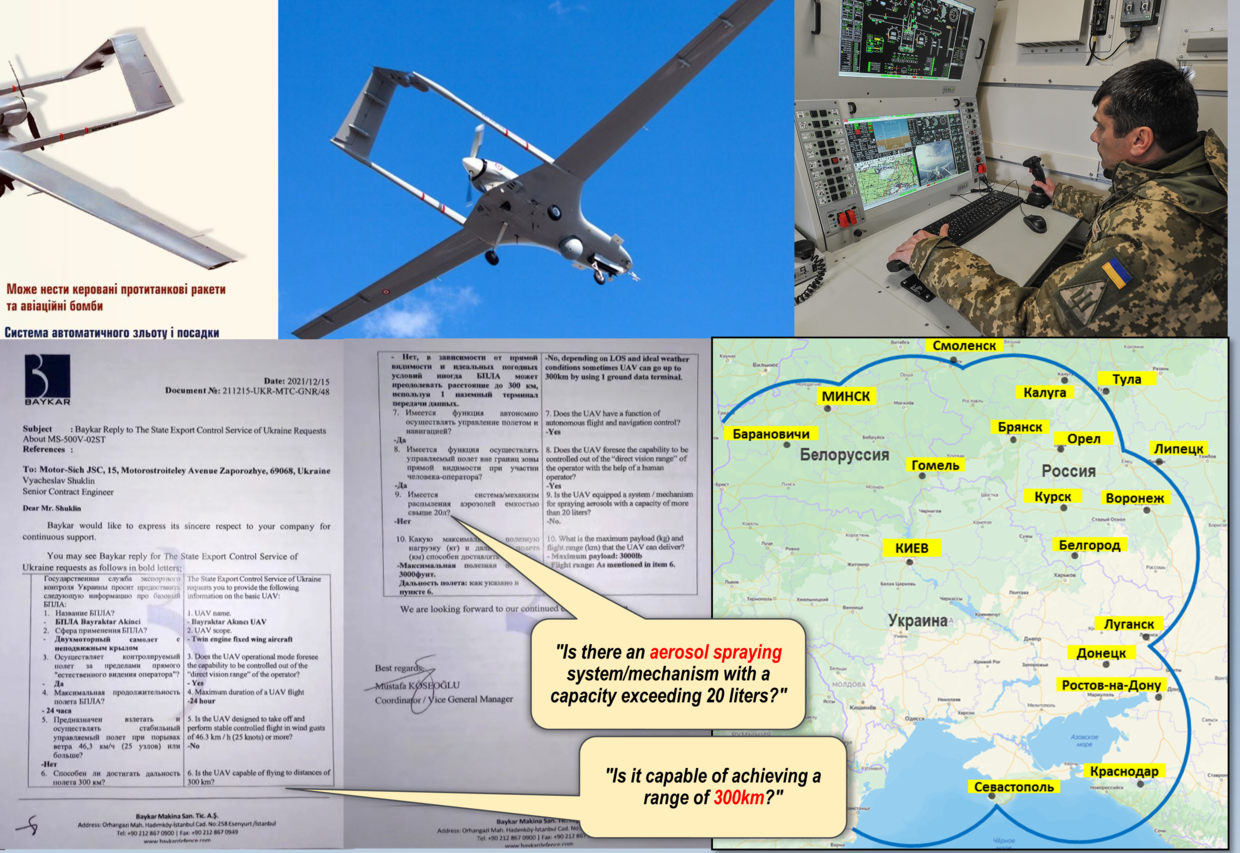 Kirillov also referenced a US patent (No. 8,967,029) for a mechanism to deploy aerosolized pathogens from a drone. The US response to a 2018 Russian inquiry about this patent did not deny its existence, but claimed that it technically did not violate Washington’s obligations under the treaties banning chemical and biological weapons, he pointed out.

Kirillov showed signed contracts between US government agencies – Defense Threat Reduction Agency (DTRA), the Pentagon, the Department of State – and the Ukrainian Ministry of Health, as well as the specific facilities inside Ukraine. The Pentagon spent more than $30 million for biological research at just one Ukrainian facility, the Public Health Center of the Ministry of Health, according to the Russian military.

DTRA official Robert Pope was “one of the key figures” in the program, and “the author of the idea of creating a central depository of especially dangerous microorganisms in Kiev,”Kirillov said. The Pentagon’s biological projects in Ukraine were coordinated by Joanna Wintrol, head of the DTRA office in Kiev, until she left in August 2020. She directly supervised projects UP-4, UP-6, and UP-8 to study deadly pathogens, including anthrax, the Congo-Crimean fever, and leptospirosis, according to Kirillov.

The US agency’s point of contact was Ukraine’s Health Minister (2016-2019) Ulyana Suprun, herself a US citizen, Kirillov noted, while a major go-between was the private contractor Black and Veatch, whose Kiev office was headed by Lance Lippencott. Another Pentagon contractor, Metabiota, also had a role in the project.

Kirillov said that Hunter Biden – son of the current US President Joe Biden – played “an important role in creating a financial opportunity to work with pathogens on the territory of Ukraine,” pointing to several emails between him and executives of Metabiota and Black and Veatch. In particular, he described the Metabiota VP as “a confidant of Hunter Biden,” based on  their correspondence. According to the general, the “Western media” has confirmed the authenticity of these emails – presumably a reference to materials published last week by the British newspaper the Daily Mail. 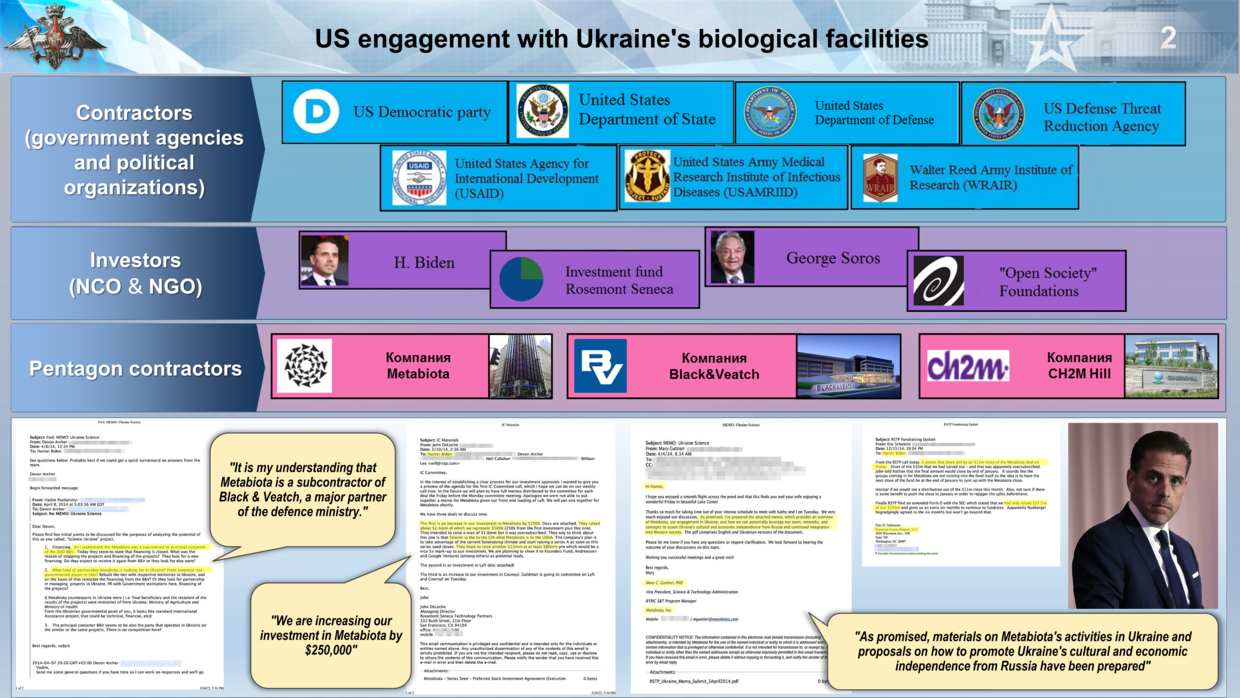 Even Kiev was concerned about the biolabs, according to a memo Kirillov showed. A 2017 letter from the Kherson department of the Ukrainian Security Service (SBU) said that DTRA and Black and Veach intend to “establish control over the functioning of microbiological laboratories in Ukraine conducting research on pathogens of particularly dangerous infections that can be used to create or modernize new types of biological weapons.”

Pointing to a June 2019 document from the Public Health Center of the Ministry of Health of Ukraine, Kirillov wondered why it insisted on secrecy and required that “serious” incidents “including the death of the subjects” had to be reported to the US bioethics authorities within 24 hours – when other documents about that specific program only reference standard blood sampling work.

“We do not exclude that the official research program is only the ‘visible part of the iceberg’, while in practice, volunteers were infected with the Congo–Crimean fever virus, hantaviruses and the causative agent of leptospirosis,” the general said, accusing the US of “a dismissive attitude towards the citizens of Ukraine,” and treating them as guinea pigs for biological and medical experimentation.

The US has long claimed that allegations about Pentagon-funded biolaboratories in Ukraine were “Russian disinformation.” Earlier this month, however, US diplomat Victoria Nuland testified before the Senate that “biological research laboratories in Ukraine” did exist, and that Washington was working with Kiev “to ensure that the materials of biological research do not fall into the hands of Russian forces.”

According to Kirillov, all pathogenic biomaterials stored in Ukraine were “transported by military transport aircraft to the United States via Odessa,” in early February 2022. On February 24, as Russian troops entered Ukraine, the ministry of health in Kiev ordered the remaining strains to be destroyed, the general said.

Kirillov said that the Russian intervention halted activities at five Ukrainian biolabs that had been working with anthrax, tularemia, brucellosis, cholera, leptospirosis, and African swine fever.