Dozens of people died in flames in Odessa, when radicals set ablaze the local House of Trade Unions with anti-government protesters blocked inside. The city is now in mourning for those who died, suffocated in smoke or had to jump out of windows.

What triggered the tragedy were violent clashes, which erupted on Friday afternoon between two rival rallies in Ukraine’s port-city of Odessa.

Around 1,500 supporters of the Kiev authorities, accompanied by aggressive fans of the local football club, Chernomorets, tried to march through the center of the city chanting “Glory to Ukraine,” “Death to enemies,” “Knife the Moskals[derogatory for Russians].” Some of the people in the group were wearing ultra-nationalist Right Sector movement insignia, were armed with chains and bats and carried shields.

Several hundred anti-government activists eventually confronted the procession. Fighting broke out as a result, with members of the rival groups throwing stones, Molotov cocktails and smoke grenades at each other and at police. The pavements were spattered with blood.

The police failed to draw the rival groups apart. As a result, 4 people were killed and 37 wounded in the violence. Police were among the injured. 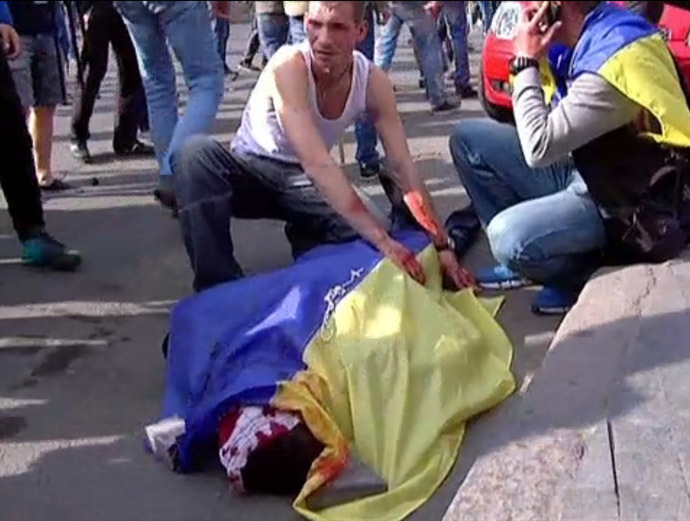 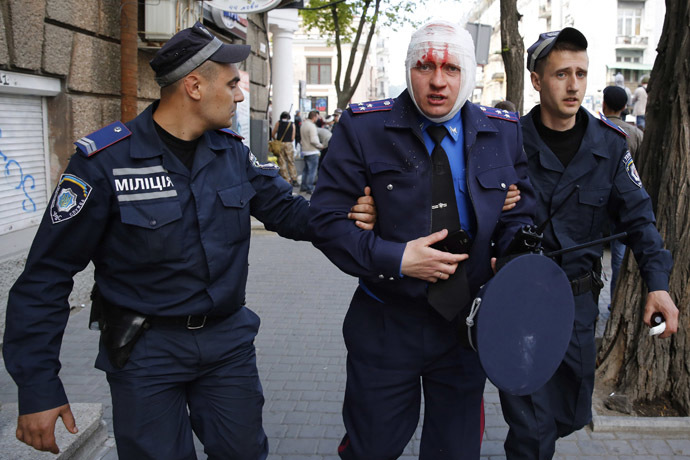 Street clashes appeared to be only the beginning of the Odessa Friday nightmare, as radicals started to drive anti-government activists back to their tent camp in front of the local House of Trade Unions. Many anti-Kiev protesters eventually hid inside the building.

“Women and children were hiding in the Trade Union’s building,” an eye-witness told RT. “First the armed men set fire to tents, then they started throwing Molotov cocktails and grenades at the building. We heard shots fired and saw smoke,” she added.

The first floor of the Trade Unions building was soon engulfed in flames. The people inside appeared to be trapped.

Dozens eventually burnt alive or suffocated to death. To escape the fire and smoke, people were hanging out of windows and sitting on windowsills. In sheer desperation, some of them eventually jumped to the ground. 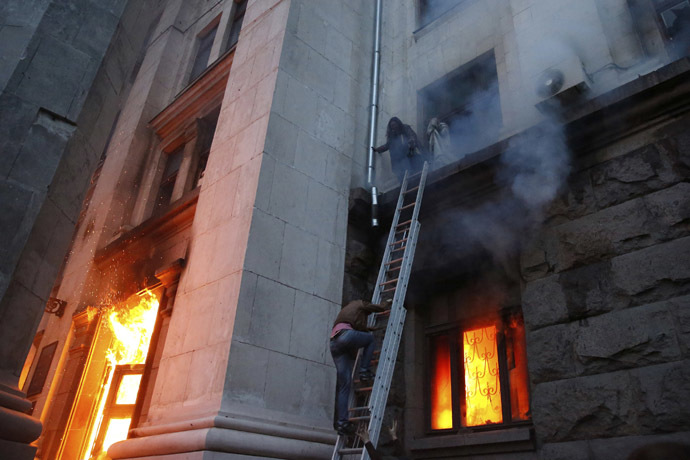 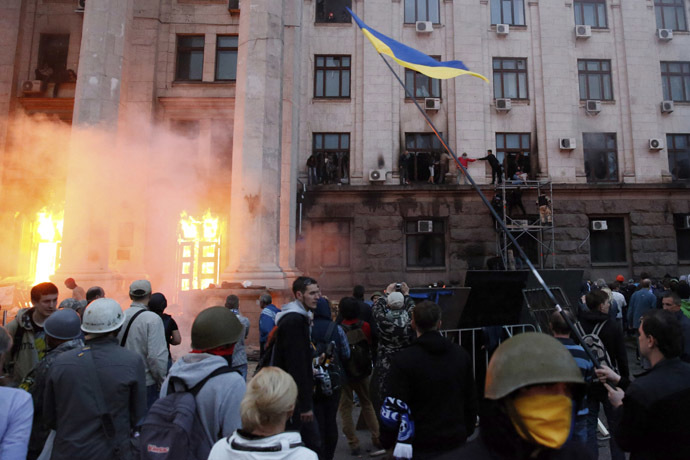 Many of those who managed to escape the fire were then brutally beaten by armed men, believed to be from the ultra-nationalist Right Sector group, who had the building under siege.

As people were dying in the burning building, some of the pro-Kiev activists jeered on Twitter that “Colorado beetles are being roasted up in Odessa,” using a derogatory term for pro-Russian activists wearing St. George’s ribbons. 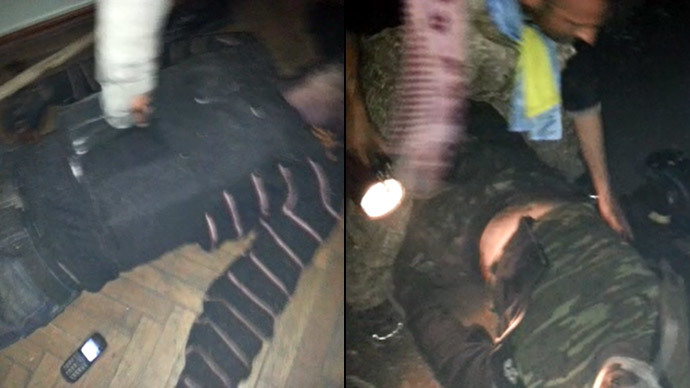 About 50 people got to the roof of the burning building and waited for help there. RT managed to speak to one of them, after they were later rescued by police.

“We were hiding there [on the roof] from this angry mob, which forced us inside this building and threw Molotov cocktails and stones at us,” he said. “People were burned alive inside the building, they couldn’t get out. We couldn’t go down, we were seeing people from other floors being brought down and then those rioters down there attacked them like a pack of wolves. We were escorted from the roof and from the building. We had to step over dead bodies when we were descending the stairs.”

39 of the dead lost their lives in the fire at the Odessa Trade Unions House, according to the Ukrainian emergencies agency, which released a statement saying that “31 of the dead were found inside the building, eight more were found outside by law enforcement officers.” 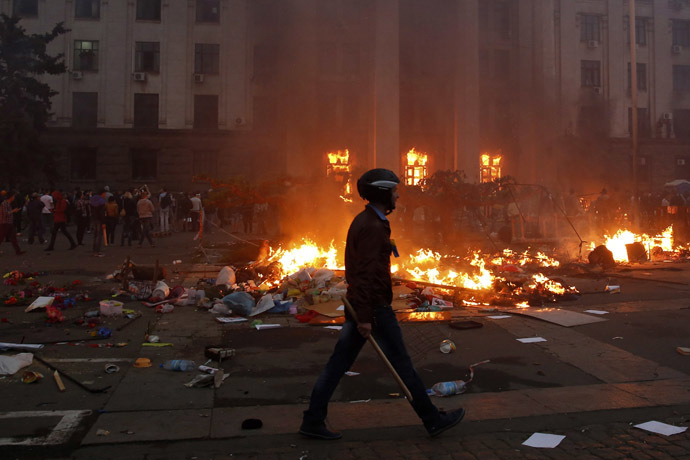 Odessa announced on Saturday a three-day mourning for the victims of the tragedy.

Later, Ukraine’s acting President Aleksandr Turchinov signed a decree signaling two days of national mourning for those who died in the special military operation in eastern Ukraine and in mass clashes in Odessa.

Residents of Odessa have since Saturday morning been laying flowers outside the burnt out Trade Union building.

Russians have been bringing candles to the Ukrainian embassy in Moscow to commemorate the dead in Odessa.