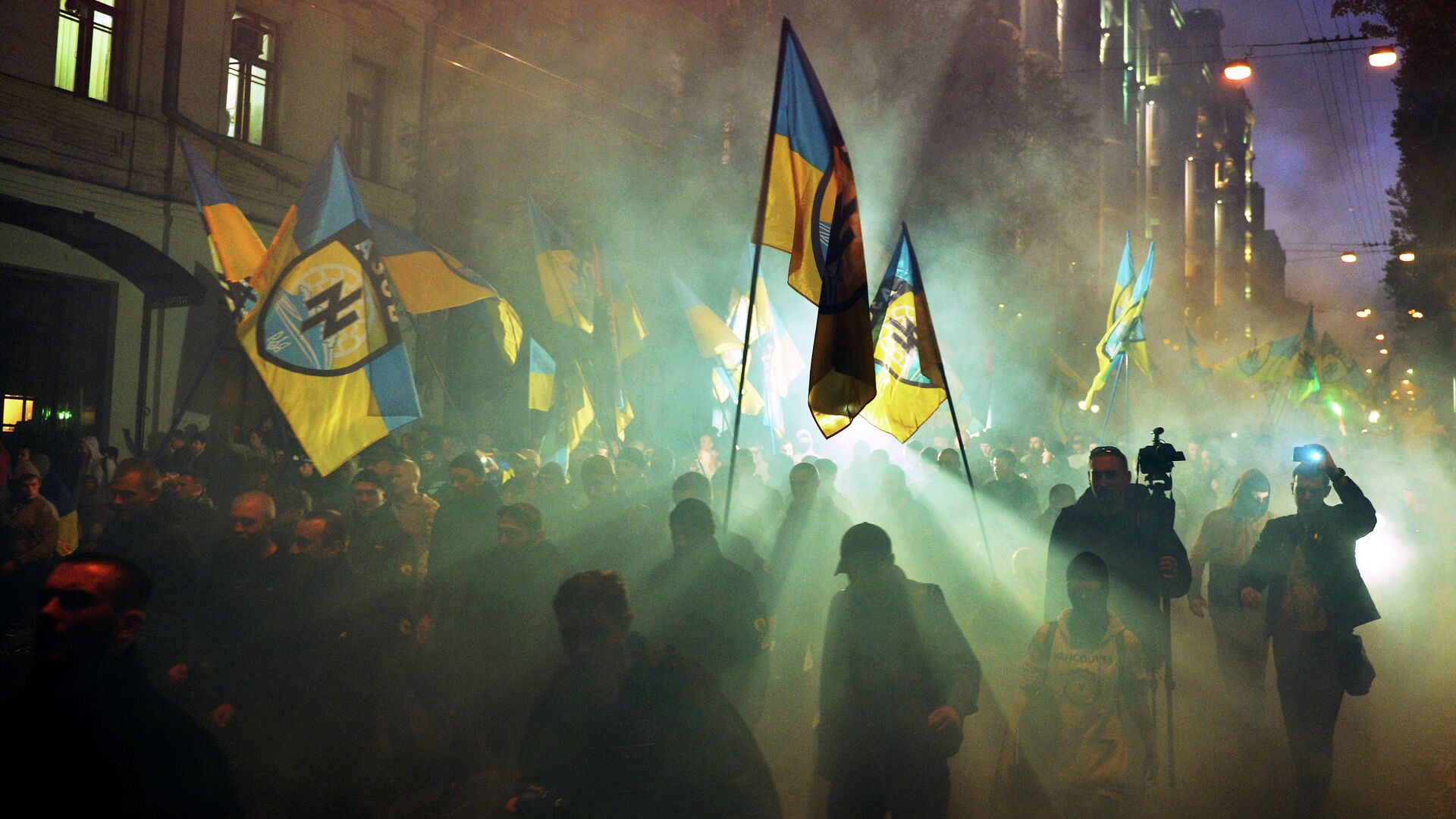 Formed as a volunteer militia in the spring of 2014 and integrated into the Ukrainian National Guard in the fall of that year, the Azov Regiment is one of the most notorious fighting units in the country, with many fighters known for openly neo-Nazi leanings and for war crimes including murder, torture and mass looting.

Ukrainian President Volodymyr Zelensky’s virtual address before Greece’s parliament alongside two Azov fighters Thursday has sparked a major political scandal in the Mediterranean nation, with lawmakers from several parties boycotting the speech in a sign of protest, while others walked out partway through.

Parliament speaker Konstantinos Tasoulas warmly welcomed Zelensky, who appeared in his signature olive green t-shirt, assuring him that “Greece has been on Ukraine’s side from the first moment,” and boasting about the military and humanitarian assistance aid provided to Kiev by Athens.

Prime Minister Kyriakos Mitsotakis, his cabinet of ministers, and President Katerina Sakellaropoulou were also in attendance, as were lawmakers from the ruling New Democracy party, and Alexis Tsipras of the official opposition SYRIZA coalition and the heads of several smaller parties.

Some SYRIZA lawmakers, as well as the Greek Communist Party (KKE) and Greek Solution, a right-populist party, boycotted the speech. The SYRIZA coalition deputies who did attend demonstratively did not clap to greet Zelensky, and did not stand and clap at the end of his speech. Lawmakers from the Movement for Change centre-left alliance and MERA25, another left-wing party, got up and left as soon as one of the Azov militants began to speak.

After speaking to lawmakers and urging them to provide as much assistance as possible to Kiev, Zelensky played a video address by “two Ukrainians of Greek origin” from the Azov battalion in Mariupol.

One of the fighters said his grandfather “fought the Nazis during the Second World War,” and that he and Azov was now fighting “Russian Nazis.” “Mariupol has may Greeks…Compatriots, we ask for your help,” the fighter urged.

The second fighter, who appeared in a mask and cap and did not give his last name, urged lawmakers to help by sending humanitarian aid to Mariupol.

“[The party] listened to democratically elected president of Ukraine Zelensky with respect and solidarity. However, it is unacceptable that members of the Azov Regiment appeared alongside him today. In the near future, we will hold a meeting of party leaders, and ask Speaker Tasoulas to explain whether he was informed and gave consent on this matter. Because I think it’s completely inappropriate,” Gerovasili said.

SYRIZA spokesman Nasos Iliopulos called on parliament speaker Tasoulas to apologize for what he described as an “extremely dangerous and insulting” affront to Greek democracy.

In a statement, MERA25 called Zelensky’s performance “obscene behaviour on an unprecedented scale,” and slammed the government for tolerating the speech. “MERA25 is in solidarity with the Ukrainian people, not with the Nazi Azov battalion. What happened today in the Greek parliament is unacceptable, it is reprehensible, it is an absolute humiliation, and it took place with the complete loss of face and indulgence by the speaker and the government, as well as those who remained in the chamber,” the party said.

Independent lawmaker Panagiotis Kouroumblis demanded an explanation from the government, pointing out among their other crimes, Azov has been accused of violence against ethnic Greeks residing in Ukraine. “Mr. Speaker, you should have informed us in advance that in addition to the president of Ukraine, we were to have paramilitary representatives speak before us today,” he said.

The KKE slammed Zelensky’s speech as “shameful,” with a statement on Twitter blasting Greece’s “pro-NATO parties” for “applauding the Nazis from the Azov Battalion, because this is demanded by NATO’s instructions and obligations.” The party stressed that “the position of the KKE [to boycott the speech] is absolutely justified.”

In an expanded statement on its website, the KKE accused “Euro-Atlantic propaganda of portraying even Nazis as ‘freedom fighters’,” and suggested that Zelensky’s appearance was turned into “a poorly staged show aimed at laundering the reputation of the reactionary government of Ukraine.”

Finally, Greek Solution Party leader Kyriakos Velopulos called Zelensky’s speech “a day of shame for the Greek parliament,” saying the appearance was turned “into a Nazi speech by Azov,” timed with the 81st anniversary of the invasion of Greece by Nazi Germany, which commenced on 6 April 1941. The politician also criticised the Ukrainian president for “insulting” Greek lawmakers by “making proposals on how to conduct our country’s foreign policy,” and going “so far as to call for further military intervention by sending weapons to the battlefield.”

Deputy Prime Minister and government spokesperson Giannis Ikonomou admitted that the appearance of the Azov fighters was “improper,” but insisted that it did not take away from Zelensky’s message.

“In his speech to the Greek parliament, President Zelensky described the suffering inflicted on the Ukrainian people by the Russian invasion and focused on the heroic resistance of his people. The inclusion in the speech of a message from an Azov Regiment fighter was improper and unsuccessful. However, it is outrageous and unworthy to use this mistake by part of the opposition, led by Mr. Tsipras, to once again justify the Russian invasion,” Ikonomou said. “If anything is shameful, it is not to take a clear position,” he added.

In comments to reporters, Prime Minister Mitsotakis called Zelensky’s speech “historic,” and suggested that Kiev today was “defending the rule of law and democracy throughout Europe.” He did not bring up the Azov fighters’ appeals.

Western officials and media have found the integration of Azov and other neo-Nazi paramilitaries into the Ukrainian armed forces one of the most difficult aspects of the Ukraine conflict to explain to their respective publics. Last week, Fox News cut out an exchange between Zelensky and one of its anchors in which the Ukrainian president defended Azov and assured American viewers that the fighters were merely “defending our country” along with the rest of the Ukrainian military.

US Congress formally prohibited funding to Azov and called it a neo-Nazi group in 2017.