How Russian and Other Minority Languages are Being Erased in Ukraine 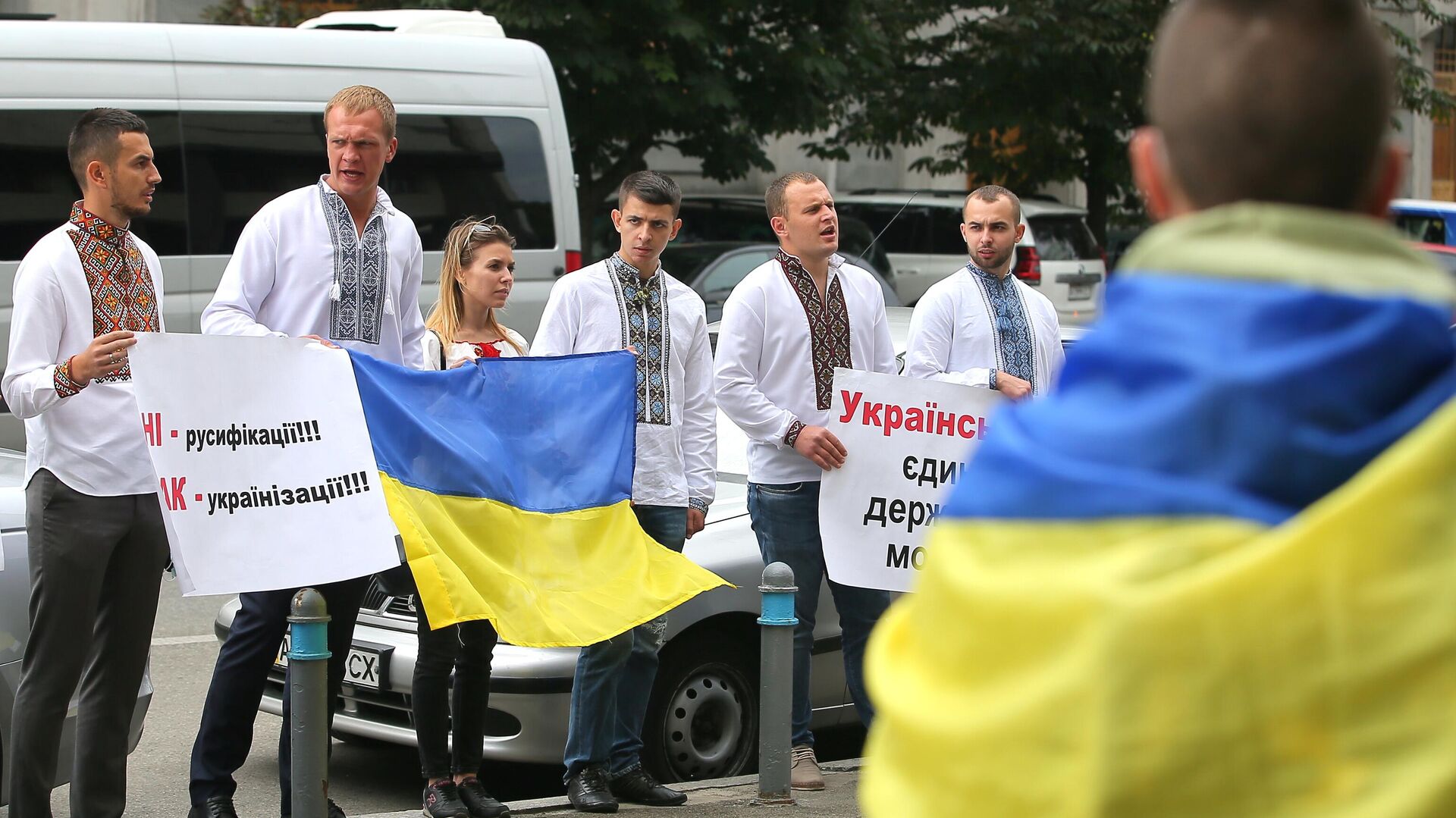 Tolstoy their native tongue. Today, the right to communicate in Russian is discriminated against at the legislative level. Authorities have also sought to drive out Russian at the strategic level, even ahead of the adoption of specific regulations.

The push to openly discriminate against the Russian language began over eight years ago. On 23 February 2014, immediately following the victory of the Euromaidan coup, the ouster of President Viktor Yanukovych, and the coming to power of the opposition, Ukraine’s parliament, the Verkhovna Rada, voted to repeal the law “On the Principles of the State Language Policy”, in force since August 2012. The law provided special status for the Russian language and other minority languages in those regions where they constituted the native tongue of at least 10 percent of the population.

The decision immediately caused a wave of protests throughout eastern Ukraine, inhabited by those who consider Russian their native language. This forced the new Ukrainian authorities to put their plans on hold, with acting President Oleksandr Turchynov vetoing the bill. The pre-Euromaidan language law was put before the Constitutional Court in 2016, and on 28 February, 2018, the court formally recognised it as “inconsistent” with the provisions of the Constitution, effectively abolishing it.

Since that time, the language issue has been regulated by Article 10 of the Constitution, which states that “the State language of Ukraine shall be the Ukrainian language”, and that “the State shall ensure comprehensive development and functioning of the Ukrainian language in all spheres of social life throughout the entire territory of Ukraine”. Article 10 also promises to guarantee the “free development, use, and protection of Russian and other languages of national minorities”. However, in practice, this provision has not been honoured in recent years. 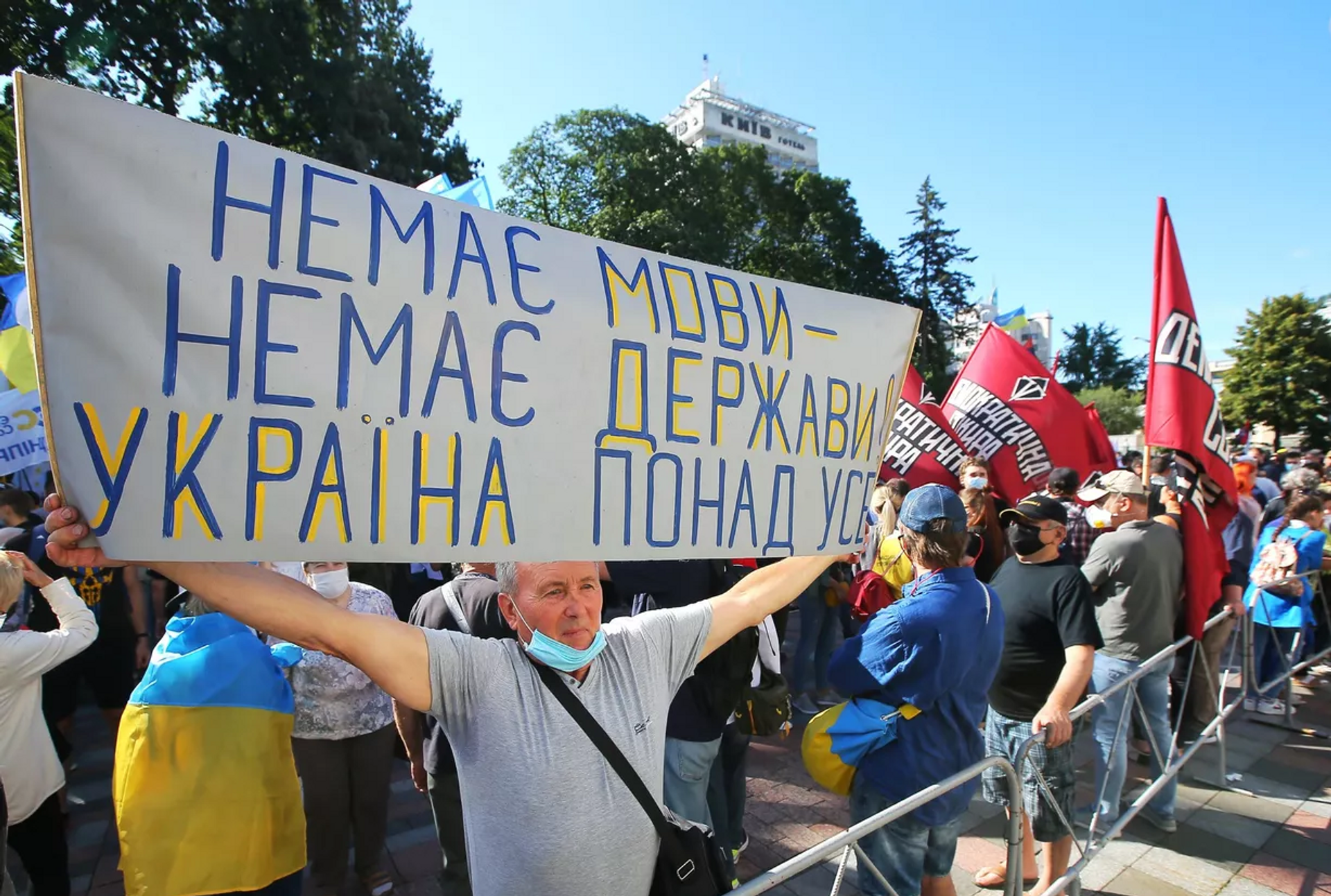 Opponents of a bill proposing to extend the rights of Russian-language studies in public schools at a protest. Banner reads: “No language – no state. Ukraine above all others.”

Language Quotas on the Radio

In June 2016, the Verkhovna Rada adopted amendments to the law “On Television and Radio Broadcasting”, which established language quotas for radio broadcasts. From that moment on, broadcasts had to be 60 percent or more in Ukrainian.

Additionally, 35 percent or more of songs played on the radio needed to be in the Ukrainian language. If songs were 60 percent or more in the languages of the European Union, then the “Ukrainian quota” was lowered to 25 percent. Ukrainian musicians received the entire prime time of listening hours – from 7 am to 2 pm and 3 pm to 10 pm.

At first glance, the amendments may seem innocuous. After all, what’s wrong with supporting domestic artists? The problem is that the goal of these innovations was not to promote Ukrainian-language songs, but to remove Russian from the airwaves. This was admitted by the amendments’ initiators.

In 2016, then-Minister of Culture Vyacheslav Kyrylenko explained that “in Ukraine there are domestic FM radio stations without any songs at all in Ukrainian. If such profanation exists, the law must be changed and the stations’ licenses must be taken away, immediately”.

The same year, a group of Ukrainian musicians penned an appeal to then-President Petro Poroshenko demanding the shutting down of radio and television airwaves to audio and video production from Russia. The petitioners claimed that all Russian media carried with it an element of propaganda – either the exaltation of the Russian military, or the ideas of the “Russian world” (i.e. the common civilisational and cultural space rooted in traditions, history, and the Russian language).

The most famous signatory was Oleg Skrypka, leader of the ethnic rock band “Vopli Vidoplyasova”, who said that “Ukrainians urgently need to learn to resist Russian cultural colonialism”, and that he was “certain that there are structures working to deliberately destroy the Ukrainian language in Ukraine”.

A year later, the Ukrainian government turned to similar quotas on television, and further tightening radio quotas. In May 2017, on Poroshenko’s initiative, the Verkhovna Rada adopted a new law “On Television and Radio Broadcasting”. The new law required Ukrainian to comprise 75 percent of airtime on national and regional television and radio stations, and up to 60 percent in local markets between the periods 7 am and 10 pm.

Any channels that failed to comply faced a fine of five percent of the total license fee. Additionally, all companies broadcasting in minority languages were obligated to provide at least 30 percent of their airtime in Ukrainian. 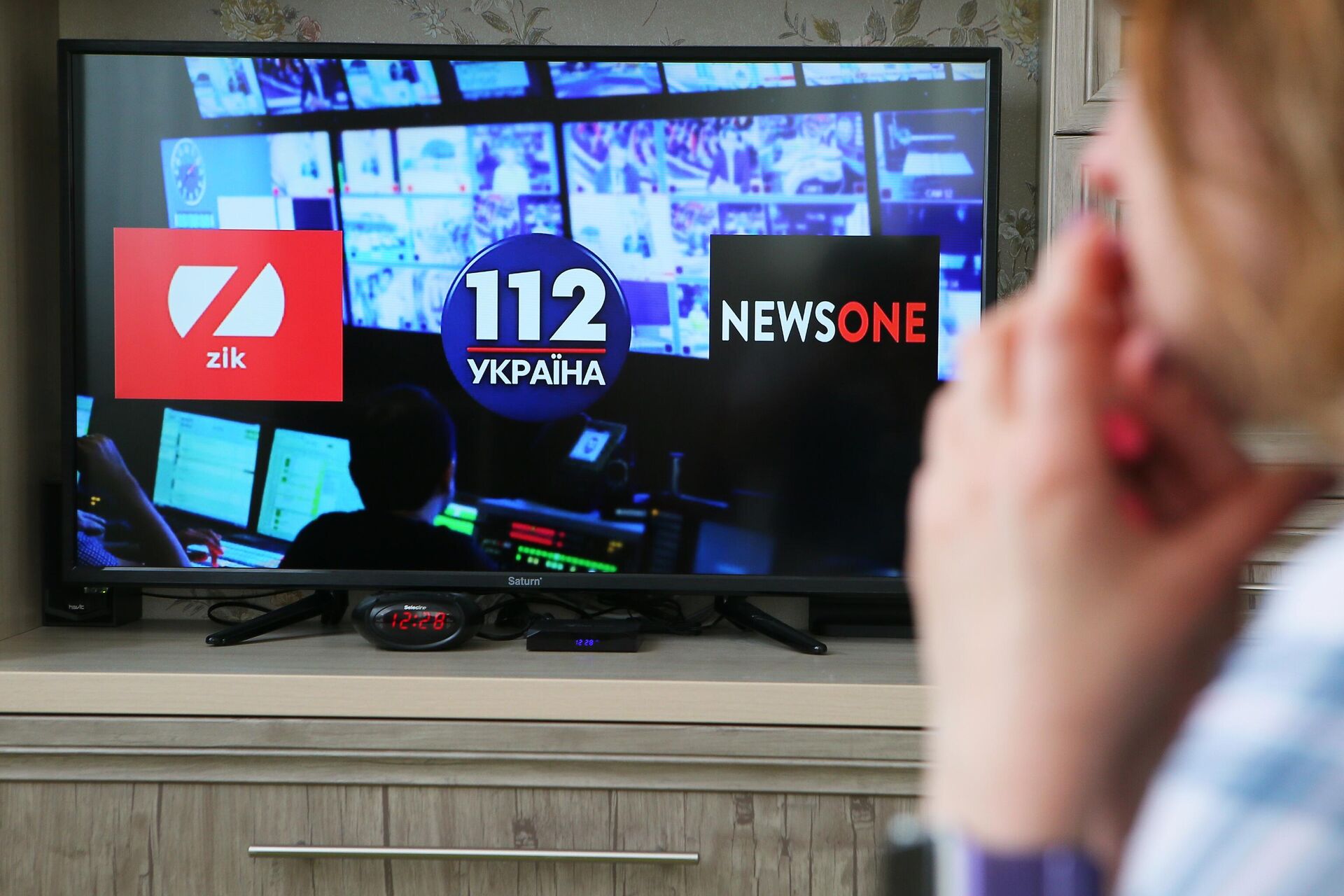 Logos of Ukrainian opposition television channels ZIK, 112 Ukraina and NewsOne shown on television after being taken off the air in 2021 for their activities.

Ban on Russian Language in Education

In September 2017, the Verkhovna Rada adopted a new law “On Education”, providing for a gradual phasing out of Russian in education. Lessons in schools and institutions of higher learning were forced to be taught exclusively in Ukrainian. The law required that from 2018 on, classes in Russian would remain only in elementary school, and that from 1 September 2020, education in Russian would be completely eradicated from the public school system.

Other languages also suffered as a result of the updated language law, although they received a temporary respite that Russian was not given. If all goes to plan, from 1 September 2023, schools teaching in languages spoken by EU countries will also be forced to switch to Ukrainian.

The law predictably led to protests not only from Russian-speaking regions of Ukraine, but also among minority communities of Bulgarians, Romanians, Hungarians, and other Eastern European peoples dotting the country. 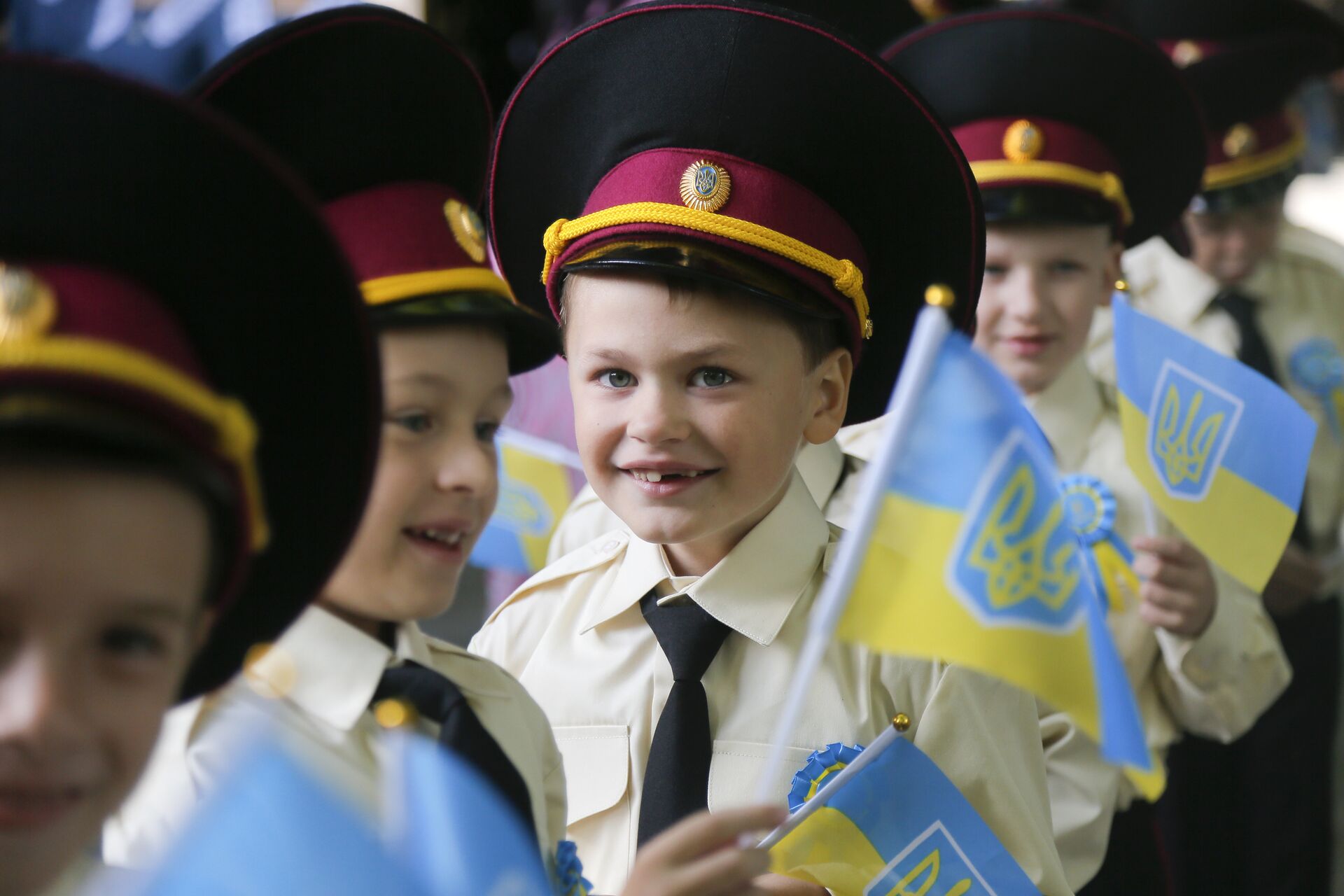 Seven-year old cadets hold Ukrainian flags as they attend a ceremony on the occasion of the first day of school at a cadet lyceum in Kiev, Ukraine, Thursday, Sept. 1, 2016

Hungary reacted especially sharply to the 2017 education law, vowing to block all initiatives by Kiev that are within Budapest’s power to affect until the issue between Kiev and the Hungarian community residing in western Ukraine’s Zakarpattia region was resolved.

Russian authorities called the education law an “act of ethnocide” of the Russian minority in Ukraine, and in September 2017, Russia’s parliament, the Duma, adopted a resolution “On the Inadmissibility of Violating the Fundamental Right of the Indigenous Peoples and National Minorities of Ukraine to Study in Their Native Languages”. In their appeal, Russian lawmakers said that the Ukrainian law did not comply with the principles and norms laid out by the United Nations Convention the Rights of the Child and the International Covenant on Civil and Political Rights.

In May 2019, days before the end of his presidency, Poroshenko signed a new law “On Ensuring the Functioning of the Ukrainian Language as the State Language”, which effectively prohibited the use of Russian and national minority languages.

The law, which stepped into force in July 2019, reinforced the Ukrainian language’s status as the only state language, with attempts to introduce multilingualism equated with nothing less than “actions aimed at the forcible change or overthrow of the constitutional order”.

The law banned the “corruption” of Ukrainian in official texts and documents, as well as the “deliberate violation” of the requirements of Ukrainian spelling.

The measure also required all officials, civil services, workers in the trades, services, education, medicine, and culture to use Ukrainian exclusively in their work. Speaking and writing in minority languages was allowed, but limited to private communication and religious rights, while officials’ knowledge of Ukrainian would be determined by a specially-created national commission.

The cultural sphere was not spared, requiring all cultural events throughout the country to be held only in the state language, and translations mandatory for theatrical performances in other languages. Ukrainian was legally fixed as the main or only one for the film industry and publishing, and became mandatory for all media, including online publications. 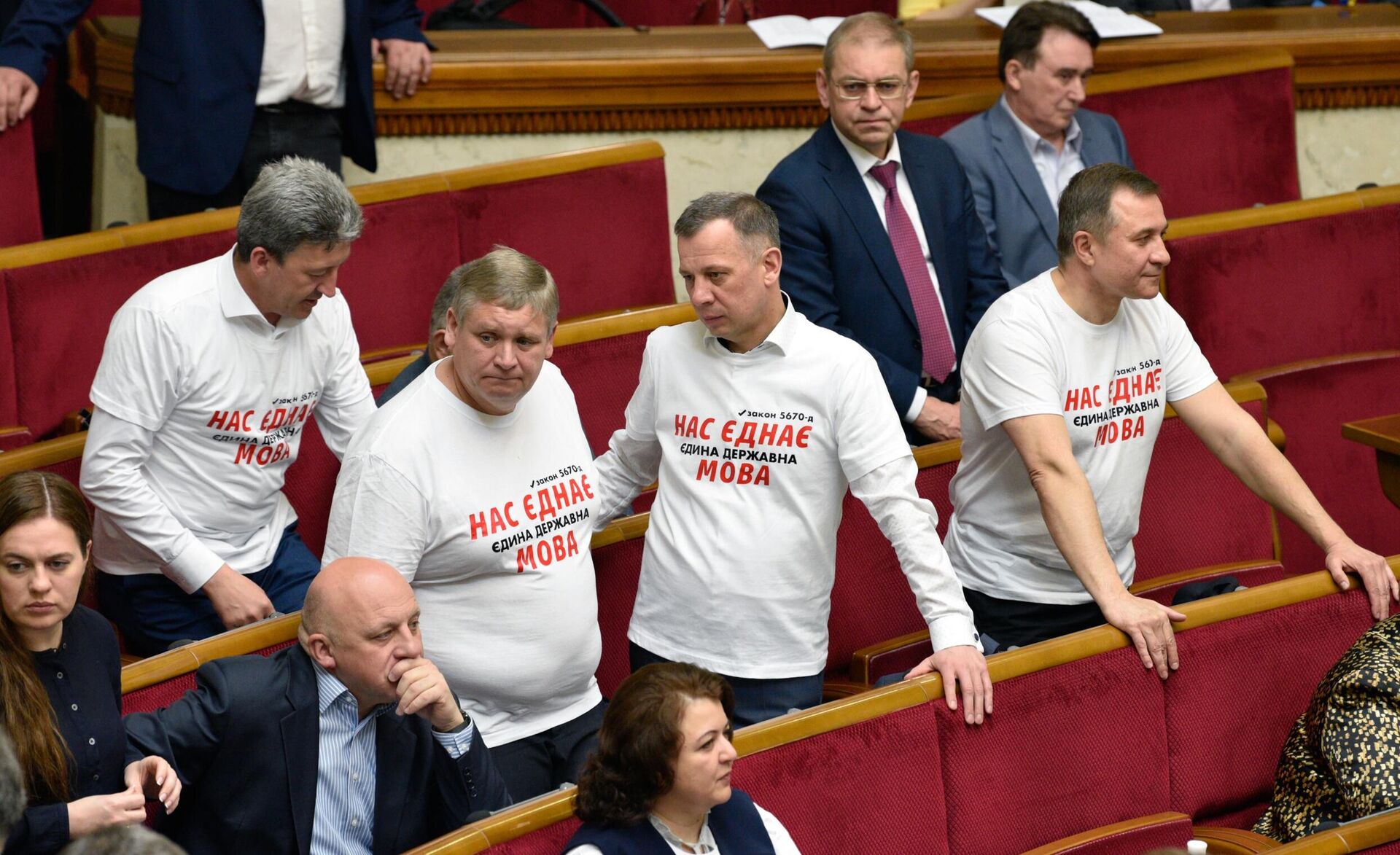 The law also required the share of broadcasts in Ukrainian in national and regional channels to be tightened further from mid-2024 onward, with all programmes in other languages broadcast with mandatory dubbing in Ukrainian. Publishing houses printing newspapers and magazines in Russian and other minority languages were ordered to print copies in Ukrainian as well.

Finally, all companies were obligated to create versions of their websites and social media pages in Ukrainian, with the start page required to be the state language.

After his election in 2019, President Volodymyr Zelensky continued his predecessors’ policy of eradicating the Russian language from Ukrainian education. In March 2020, he signed an additional measure “On Complete General Secondary Education” complementing the “On Education” law, and providing for the gradual reduction in teaching in national minority languages, including Russian.

On 1 September 2020, as promised, Russian-language schools in Ukraine were forced to switch to Ukrainian, and only those who entered school before 1 September 2018 were allowed to continue studying Russian at the primary level. 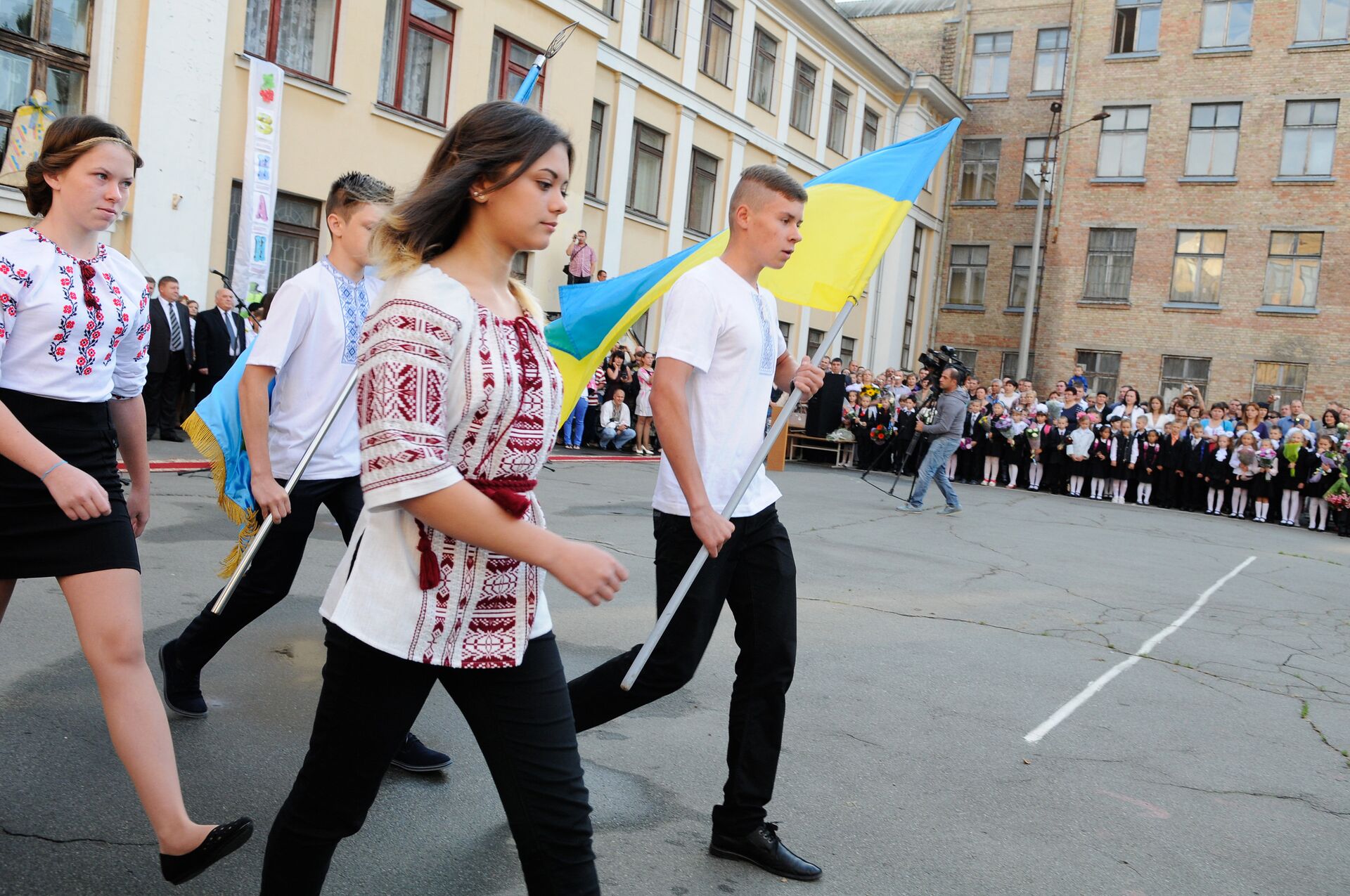 The “On the Ensuring the Functioning…” Law has been applied in stages. The advertising industry, for example, was made to switch to Ukrainian in January 2020. In July of the same year, publications in the scientific and medical fields had to be published in either Ukrainian, English, or an official language of the European Union. This was followed by the “Ukrainianisation” of the names of airports, ports, transit stations, and stops.

In January 2021, the service sector, including online stores, switched to Ukrainian.

Six months after that, a language proficiency test was introduced for all future civil servants, and in applications for Ukrainian citizenship. Public events began to be held exclusively in the state language, with half of all publications published in Ukrainian, and tourist services provided only in Ukrainian (with the exception of services provided to foreigners).

In July 2021, the law “On Ensuring the Functioning of the Ukrainian Language as the State Language” was deemed constitutional by the Constitutional Court, the same legal body that threw out the 2012 Yanukovych-era law.

Language quotas for national print media stepped into force on 16 January 2022. According to the scheduled plans, in July 2024, Ukrainian language requirements for television broadcasting will be tightened to 90 percent instead of the current 75 percent, and regional channels will have to increase their Ukrainian content to at least 80 percent, up from the 60 percent now.

Zombified Nation: How Young Ukrainians Were TAUGHT to Hate Russians

Ukraine has special bureaucrats whose job it is to monitor the introduction of the Ukrainian language in all spheres of life, with the officials appointed by the state and formally called “language ombudsmen”.

These “defenders of everything Ukrainian” monitor the implementation of legislation on the state language, and study complaints by people informing on those who aren’t complying with the law. Such complaints can be made against both legal entities and individuals. Ombudsmen are required to report to authorities on their probes, and on the punishment meted out to these “language criminals”.

In July 2020, nationalist politician Taras Kremin was appointed commissioner for the protection of the state language and proceeded to dutifully carry out his responsibilities.

In 2021, in an interview with Ukrainian media, Kremin advised citizens who do not like his position and the law on total Ukrainianisation to leave the country.

The ombudsman demanded that dissatisfied citizens “respect” the Ukrainian people, “who have fought for centuries for their right to independence, and continue to fight the occupier on the front in the east of the country”.

From 2024 on, it is planned to apply various additional penalties for anyone caught “publicly derogating” or “insulting the state language”. Perpetrators can be given a large fine or sentenced to arrest of up to six months, or even imprisonment for up to three years. The formulation of the offence is vague enough to be applied in almost any situation when a person decides to speak in their native Russian, Hungarian, or Romanian.