North Korea’s (DPRK) nuclear missile program remains a major headache for the United States, and much of the wider world.

Its development would not have been possible, however, without Pyongyang’s access to Soviet technology, specifically  nuclear-capable hardware that remained in Ukraine after the collapse of the USSR. This article delves into the unlikely story of the part Ukraine played in making North Korea a major threat to America and its Asian allies.

The US, South Korea and Japan share a lot of common goals, one of them being the complete de-nuclearization of the Korean Peninsula. US President Joe Biden has once again made this point clear at the 2022 NATO summit in Madrid. Meanwhile, Washington’s allies in Asia have recently found a new reason for concern – on June 14, South Korean Foreign Minister Park Jin announced that North Korea had completed preparations for a new nuclear test.

Prior to that, in March 2022, Supreme Leader Kim Jong-un effectively ended his country’s self-imposed 2018 moratorium on testing intercontinental ballistic missiles (ICBMs) capable of reaching US soil. Now, both Seoul and Washington are anxiously awaiting news about new test launches.

How does a country which is effectively cut off from the rest of the world even achieve this level of technology? You might be surprised, but we must go to Ukraine for answers.

Today, we can say with near absolute certainty that, when designing and constructing its intercontinental ballistic missile, the DPRK used RD-250 rocket engines produced at the Ukrainian Yuzhmash machine-building plant in the city of Dnepropetrovsk.

Like most of the still-functioning industrial enterprises in Ukraine, Yuzhmash is part of the Soviet legacy. The plant was built in 1944 with World War II in full swing; later, during the Cold War, its engineers designed and produced the USSR’s most advanced missiles to compete with the US in the arms race.

In the 21st century, Washington once again feels threatened by certain Yuzhmash products – despite the fact that Ukraine, following its 2014 coup, became a satellite of the US, and the plant has since signed contracts with the Americans (to produce rocket stages, engines for these stages, as well as various hardware used in their launch vehicles).

In August 2017, The New York Times, citing Michael Elleman, a missile expert with the lobby group Institute of International Strategic Studies (IISS), reported that the DPRK had most likely used the RD-250 engines to design its own intercontinental ballistic missile.

“It’s likely that these engines came from Ukraine – probably illicitly… The big question is how many they have and whether the Ukrainians are helping them now. I’m very worried,” Elleman said. The experts at the IISS, however, believed that the official authorities in Kiev were not involved in the smuggling operation.

The design bureaus of Yuzhmash, as well as Yuzhnoye Design Office, a similar enterprise in Dnepropetrovsk, were emphatic in their denial of any collaboration with Pyongyang and its nuclear missile program. Secretary of the National Security and Defense Council of Ukraine Aleksandr Turchynov even suggested that the accusations were part of an ‘anti-Ukrainian campaign’ carried out by Russian intelligence. He claimed it was Moscow’s way of concealing its own assistance to North Korea.

However, in a 2018 report by the 1718 Sanctions Committee (DPRK), the Ukrainian authorities admitted that, in all likelihood, the engine for North Korea’s ballistic missiles was created using components of the RD-250 engine produced by Yuzhmash. They added that, in their opinion, the deliveries must have been made through Russian territory. Of course, they would say this.

Vasily Kashin, Director of the Center for Comprehensive European and International Studies at the National Research University Higher School of Economics (HSE), told RT that this controversy about North Korea receiving liquid-fuel engines from Yuzhmash remains the only incident officially on record.

“It wasn’t Ukraine sending their engines to North Korea – it was the work of North Korean scientific and technical intelligence in Ukraine that made it all happen. Apparently, the liquid-fuel rocket engines had been acquired there illegally even prior to 2014,” the expert concluded.

Be my guest, or transfer of military technology

At the same time, relations between Kiev and Pyongyang have never been friendly and heartfelt enough to suggest Ukraine’s willingness to provide North Korea with powerful nuclear weapons. However, there is documentary evidence of Ukraine’s corruption-based cooperation with other countries in the nuclear missile field at the turn of the 21st century, which may invite precisely this kind of thinking.

In 1994, Kiev finally discarded the last of its remaining nuclear arsenal, of around 1,000 missiles it had retained after the collapse of the USSR. The plan was to pass half of them on to Russia and to destroy the rest – as part of the US-funded disarmament program.

But in 2005, ex-president of Ukraine Viktor Yushchenko confirmed that the previous administration had sold X-55 cruise missiles capable of carrying a nuclear warhead to Iran and China “through several figureheads,” as he put it. The range of these missiles is 2.5 thousand kilometers, so this scam practically meant an increased threat of nuclear attack for Israel and Japan.

However, it seems that North Korea had other ways of getting what it wanted.

Starting from the 1990s, representatives of North Korea were caught red-handed trying to get hold of Soviet nuclear missile technology on many occasions. Kashin believes Pyongyang has been conducting scientific and technical intelligence in Ukraine for quite a while now.

“According to declassified KGB documents, North Korean scientific and technical intelligence efforts in Ukraine date back to Soviet times. There was a criminal case, for example, involving their agent, a worker of the Arsenal Factory in Kiev, who was caught stealing parts of anti-tank missiles. North Koreans had ample opportunity to get hold of Soviet military technology in the 1990s and early 2000s in Dnepropetrovsk where they were snooping around all the time. And the Ukrainian government was not involved in any of this. There is nothing to confirm that they were selling their technology deliberately, of course. They just took advantage of the gaps in Ukraine’s flawed counter-intelligence system,” Kashin said.

Mikhail Khodarenok, a military analyst and retired colonel, reminded RT about the chaos and anarchy that reigned in post-Soviet Russia and Ukraine, affecting many areas of life in the 1990s.

“Back then, Ukraine saw much of its critically important technology leak out of the country. We can trace Ukrainian influence in both China’s and Iran’s strategic cruise missile arsenals. And it’s not surprising – everyone did their best to survive in those turbulent times. And many things may indeed have been done without the involvement of [the] Ukrainian leadership.”

“But I don’t believe North Koreans were able to steal much. I am inclined to think that, in many cases, it was all based on deals, on mutual agreement. It’s just that the government was not part of it,” Khodarenok concluded. 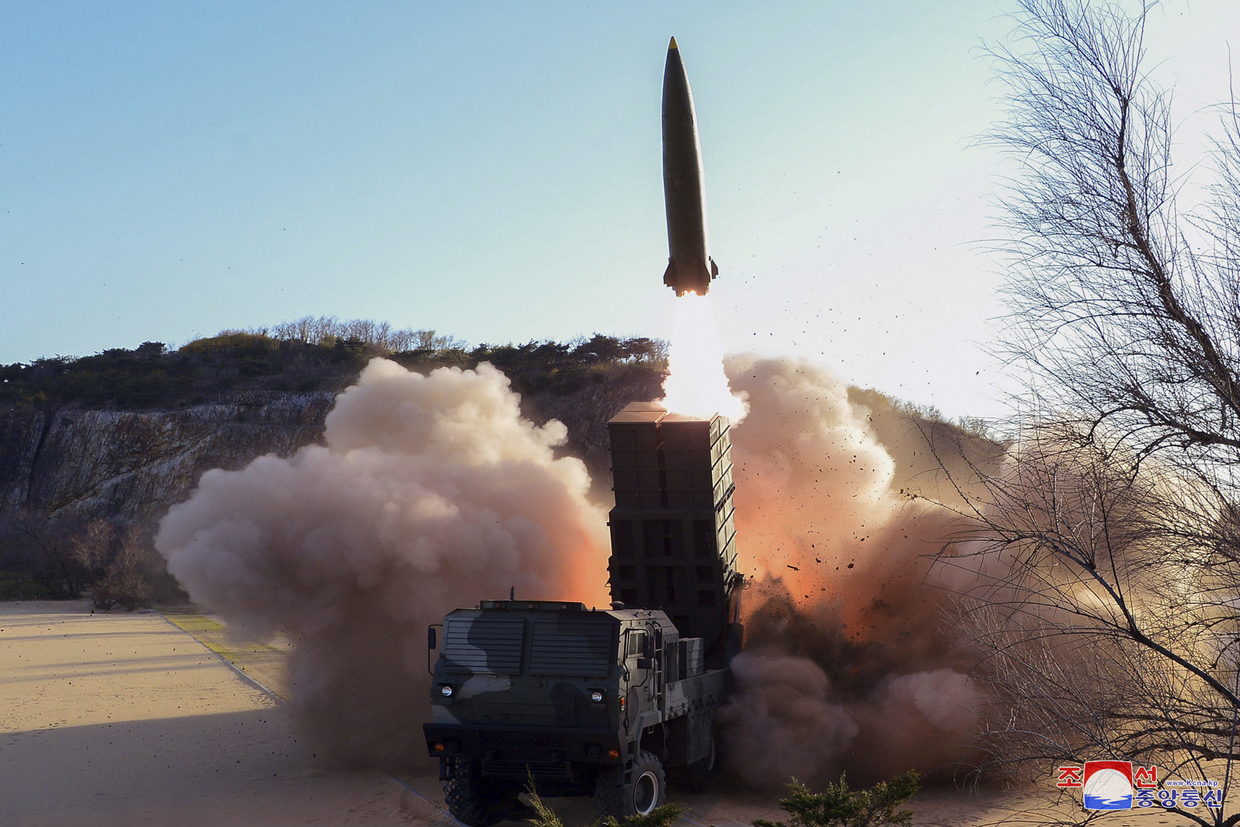 And 20 years after the Soviet Union collapse, espionage attempts by North Korea continued.

On 12 December 2012, the DPRK became the 10th nation to join the global space club by placing its Kwangmyongsong-3 (or KMS-3) satellite in Earth orbit. It was the same year when a high-profile spy case involving North Korean nationals was investigated in Ukraine.

It resulted in two citizens of North Korea (employees of a trade mission in Belarus) being sentenced to eight years in prison. They were caught trying to buy technical documentation and scientific works containing important R&D results from the staff of the Yuzhnoye Design Office in Ukraine. And they offered to pay a modest fee of $1,000 for every research paper on liquid-fuel engine systems. An unnamed source later informed the Strana.ua web portal that the Koreans had taken a particular interest in the design of the legendary R-36M (or Satan) intercontinental ballistic missile engine. It’s the most powerful missile of its kind.

Another issue that has likely played into the hands of North Korean technology hunters is the ‘brain drain’ phenomenon, with dozens of Soviet engineers fleeing abroad after the Belovezh Accords were signed in 1991, disbanding the USSR.

The post-Soviet de-industrialization of Ukraine took stable income and career prospects away from dozens of professionals working at the Ukrainian aerospace manufacturer Yuzhmash. So these people were forced to look for other ways to make a living.

Choices were limited. They could either try their luck in the wild post-Soviet labor market (attempting to start a business or becoming a salesperson) or agree to a tempting –albeit questionable in terms of patriotism and legality– offer to help other countries with their nuclear missile programs.

Many of them found themselves in difficult circumstances –personally and professionally– after the fall of the Soviet Union. It’s even believed that some of them went to North Korea, Iran and Pakistan.

Former US Ambassador to Ukraine Carlos Pascual later admitted that the importance of this phenomenon, when top-level specialists lost their jobs, was overlooked. It wasn’t just a matter of their personal turmoil – this was an important factor for the non-proliferation of weapons of mass destruction.

The US and EU, however, took some initiatives in the mid-1990s. They funded the Science and Technology Center in Ukraine, an intergovernmental organization that was supposed to make sure that expertise and experience in the area of weapons of mass destruction didn’t leak.

Executive Director Curtis Bjelajac admitted that there was a point where the center basically gave out money to certain specialists. In the end, millions of dollars were spent on former Soviet engineers and scientists specializing in missile and nuclear technology. The general consensus is that this helped stop the flow of professionals into countries that are toying with dangerous technology. But were there any ‘leaks’?

According to Mikhail Khodarenok, there is an understanding within the community of experts that it was the work of Yuzhmash specialists that helped North Korea develop its missiles.

“You can’t really judge Yuzhmash engineers – everyone tried to survive back then, and those countries paid good money. I think that many went there for work. North Korea would not have made such advances without the expertise in the critical technology. The Soviet Union also had to borrow – it used Wernher von Braun’s research after the war,”Khodarenok said. (Von Braun was a German aerospace engineer and Nazi Party member who later worked in the US — RT).

Compared to Western Europe and the US, South Korea has been very reserved in its help to Kiev during this year’s crisis, providing mostly moral support and supplying non-lethal military aid. Some are surprised by this reaction. Why doesn’t Seoul do more? Maybe South Korea is concerned with the possibility that the equipment received by Ukraine might someday magically reappear north of the 38th parallel?

Khodarenok thinks that this is unlikely but he finds the theory interesting. He says that the real reason South Korea is not going all in is that “every Russian family owns several things manufactured in South Korea, and the country doesn’t want to lose that market”. However, Seoul may change its stance under pressure from Washington, the expert warns.

Kashin sees the connection between South Korea’s reserved reaction and the North’s nuclear problem, but he finds it elsewhere.

“South Korea knows that if it helps Ukraine, Russia will stop complying with the sanctions against North Korea. Seoul understands that it shouldn’t burn all bridges with Russia, whose military operation in Ukraine was supported by North Korea (one of very few countries). And since Russia’s relations with all developed [sic] countries went south, Moscow might decide to get creative with its North Korea partnership. And nobody wants that – especially not South Korea. Israel, by the way, is guided by the same considerations – it has refused to supply Ukraine with any lethal equipment, because Russia might respond by providing Iran with some unpleasant weapons,” he commented.