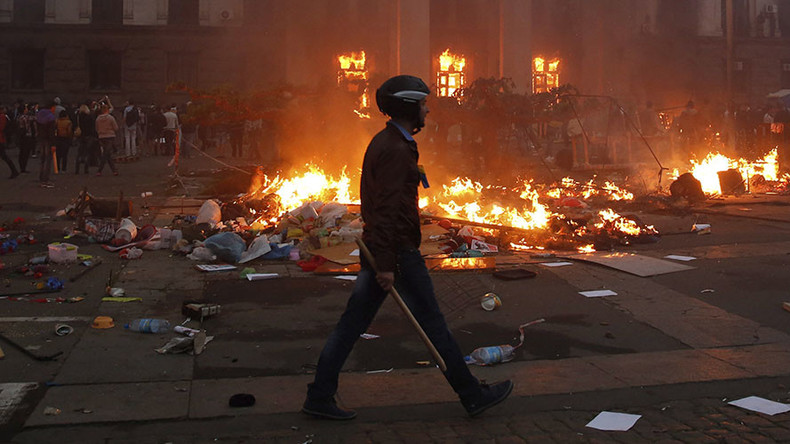 A protester walks past a burning tent camp and a fire in the trade union building in Odessa May 2, 2014. © Yevgeny Volokin  © Reuters

Russia has circulated a statement at the UN Security Council calling for the investigation of the mass killings which took place in Ukraine’s city of Odessa almost two years ago when dozens of people were burned alive.

The proposed document is also said to focus on the implementation of the Minsk agreements.

“We have circulated a very simple draft statement which underlines the need to implement the Minsk peace agreements and also contains an appeal to investigate tragic events in Odessa on 2 May 2014, when 48 people were burnt to death,” Russia’s Envoy to the United Nations Vitaly Churkin said. “We wonder what the reaction of the Security Council’s members will be.”

Churkin said that Moscow expects the statement to be adopted as early as on Thursday after the Security Council session at Ukraine’s request takes place.

On May 2, 2014, dozens of people died trapped inside Odessa’s House of Trade Unions, which was set ablaze by pro-Kiev radicals. Also 250 were injured in clashes around the area.

Russia appealed to the UN and OSCE to conduct an impartial investigation of the events back in 2014, but the proposal was rejected.

Talking about the upcoming meeting, Churkin said he did not know what the goal of the session is, but stressed he is always open for a good dialogue.

The UN Security Council session is to be held on April 28 upon the request of Ukraine’s President Petro Poroshenko, who said the reason for the initiative is the“worsening situation in Donbass and Russia’s failure to implement the Minsk agreements.”