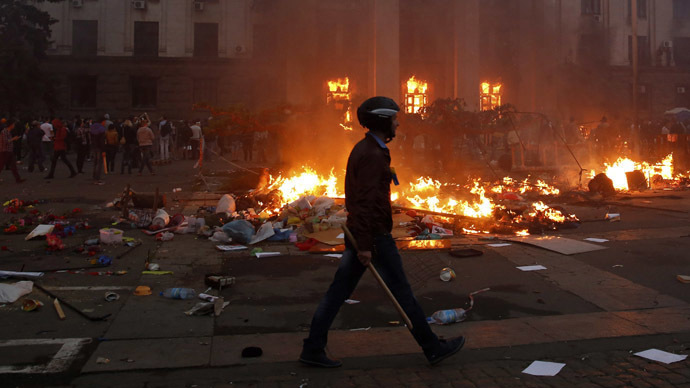 A protester walks past a burning tent camp and a fire in the trade union building in Odessa May 2, 2014. (Reuters / Yevgeny Volokin)  © Reuters

Western media is willfully concealing from the American people the massacre of unarmed civilians in Odessa, Ukraine on May 2 by pro-Maidan radicals, including members of nationalist and neo-Nazi organizations.

Notorious radical group Right Sector played a key role in the February violent coup, and the ultra-nationalist Svoboda party is holding key positions in the new coup-installed Ukrainian ‘government,’ which is supported by the US and EU governments.

To avoid mentioning the role of neo-Nazis in the massacre, media weasel words such as “the sequence of events is unclear” are being substituted for the truth clearly seen in videos and eyewitness accounts, which show unarmed anti-coup protestors being burned alive by radicals, who then beat survivors with clubs.

This kind of corporate media manipulation of the American people is, in fact, nothing new. It follows a well-established pattern – a pattern of false or distorted reporting to demonize those who the US state opposes, and to uphold those who it supports, regardless of the truth of the matter. The purpose is to manipulate the American people into supporting US state policies and positions which they would not support if given the truth.

The day after the riots in Lhasa, Chinese people awoke to find their long-time friendly outreach to the Western world reciprocated not with like friendship, but with the heaping of calumny, abuse, and outright lies upon the Chinese government, police, and people.

In the wake of the riots, Western world journals published dozens of pictures purporting to show the brutality of Chinese police in Tibet – pictures which were subsequently revealed as falsely labeled shots not from Tibet but of police actions in India and Nepal! Other pictures were cropped to make it look like Chinese police were attacking the rioters when the full picture showed nothing of the kind. And still other photos claiming to show police brutality were revealed to be medics helping the injured. 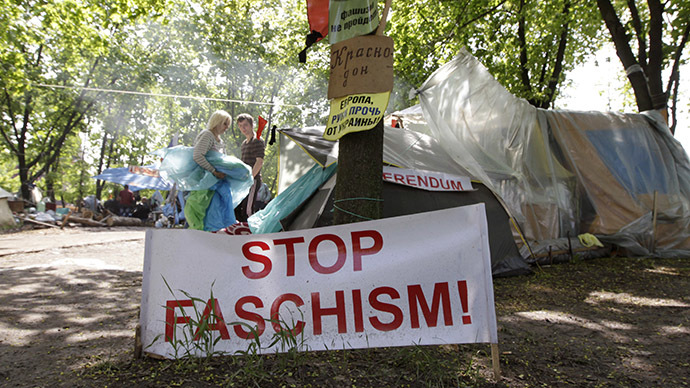 This falsification was amply documented and several major corporate news media – including CNN – were forced to apologize or admit their ‘mistake.’

At the same time, the rioters who savagely beat innocent people in the street, burned down buildings, and killed more than twenty innocent civilians were turned by thousands of Western news articles into heroic champions. They were “protestors” or “champions of human rights” or “freedom for Tibet.”

Notwithstanding any human rights or religious freedom issues with regard to Tibet, there can be no doubt that in reality, the rioters committed murder.

Meanwhile, the restrained actions used by Chinese police to quell the riots were turned by Western media into “suppression” or a “crackdown on Tibet” or “denial of religious freedom,” and the like.

Most odious of all – and much like the ‘ingenious’ wording of many current articles on the massacre in Odessa – the articles frequently implied that it was the Chinese police, and not the rioters, who had killed people. Estimates of the death numbers were slyly positioned alongside phrases like “Chinese crackdown,” as in “Amid the police crackdown, estimates now indicate that 20 people have died,” giving the false impression that the Chinese authorities, not the rioters, were the source of the brutality, suffering, and death.

Adding insult to injury, political leaders from the US and its western European allies entered the fray, asking China to “exercise restraint” in its dealings with the murderous rioters, and lecturing not the murderers, but the Chinese government, on the need to “respect human rights.” Some leaders even stated that they might not attend the Beijing 2008 Olympics in protest at the falsely alleged “human rights violations.”

The false pictures, inaccurate articles, and boycott threats by Western leaders were no mistake, no accident based on a “misunderstanding of China.” Videos of the riots, and eyewitness testimonies by both Chinese and Western witnesses, were readily available.

For people who witnessed the riots, and for Chinese people who saw the videos, the Western media accounts were not merely unjust, but bizarre and almost unimaginable in their departure from reality.

Similarly, Western media’s concealment of the massacre by neo-fascists of civilians in Odessa is not an accident or “misunderstanding.” Photos of the neo-fascist leaders and followers with Nazi-style regalia and quotes from leaders praising those who kill Jews, Russians, and communists are readily available. So are the photos and eyewitness accounts of what happened in Odessa.

The reasons for the corporate media misreporting on Odessa is that it serves not to inform the public or protect its interests, but to prepare it – regardless of truth – to accept sanctions, use of armed proxies, or direct war against whatever country or group the US state has targeted in its drive for world domination – in this case Russia and the eastern Ukrainians.

Eric Sommer is an independent journalist and researcher who has lived in China for 12 years.

The statements, views and opinions expressed in this column are solely those of the author and do not necessarily represent those of RT.