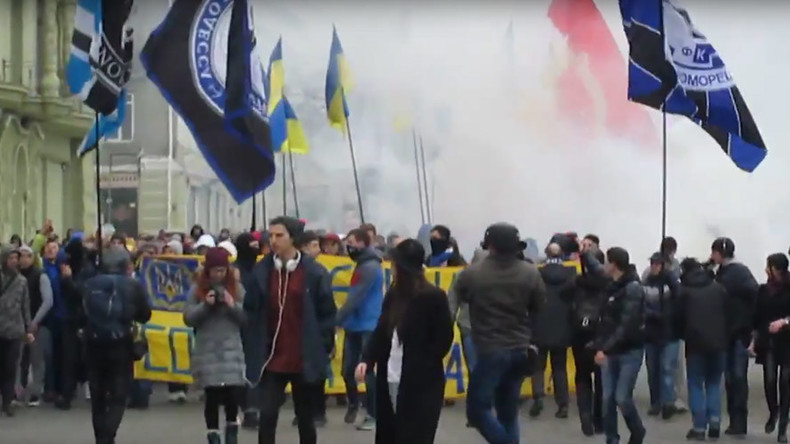 Hundreds of football fans, far-right nationalists and pro-Kiev activists marched through the streets of Odessa, where back in 2014 a similar event erupted in massacre. Meanwhile the UN human rights watchdog has criticized authorities for stalling its investigation.

Nationalist slogans could also be heard at the march, such as:“Ukraine is above all”, “Heroes of the War in the East: Glory, Glory, Glory” and “Glory to the nation! Death to enemies!”

Local media claimed that the purpose of the march was to protect the fans of Odessa’s football club from the alleged encroachments of Russian Sberbank. Fans assured that they are willing to do anything to prevent the alienation of the property of their club.

The march organizers said that ultras from rival football fan clubs had agreed to hold a peaceful march, as well as to join forces to control proceedings so that they were not to be thwarted by the expected provocations from anti-government “anti-Maidan” movement, according to Ukrainian news agency Ukrinform.

No incidents have been reported.

Saturday’s march was the first event of its kind since a tragedy that happened in Odessa on May 2, 2014. Back then a similar march resulted in clashes, as football fans and “Right Sector” radicals supporting the coup-imposed authorities in Kiev attacked “anti-Maidan” activists during their demonstration.

The confrontation led to a tragedy that left 48 people dead and 247 injured as nationalists burnt the protester camp and then set fire to the Trade Unions House with anti-Kiev activists trapped inside. According to witnesses, many of those who managed to escape the flames were then strangled or beaten with bats by radicals. However, there were also reports of some on the outside trying to proffer help to those who were trapped.

The Office of the United Nations High Commissioner for Human Rights has noted in its latest report that “continuing delays in investigating the 2 May 2014 events appear unjustified and inconsistent with an intent to bring those responsible to justice.”

“The investigations into the events have been, at various stages, characterized by general institutional deficiencies, procedural irregularities indicating a lack of willingness to genuinely investigate or prosecute those responsible, and both direct and indirect political interference suggesting deliberate obstruction and delay of judicial proceedings,”the report said.

The OHCHR expressed its “concerns” that it is mostly anti-government activists who are on trial over the May 2 “mass disorder”.Proceedings are “characterized by partiality, procedural violations and pressure on the judiciary by ‘pro-unity’ activists,” who aggressively pressured judges into repealing the decision on conditional interim release on bail to five ‘pro-federalism’ detainees.

“The failure of State actors to uphold or protect judicial independence has also led to delays in prosecuting the only ‘pro-unity’ activist charged in relation to the 2 May 2014 events, for killing a person and injuring a police officer,” the report added, noting that in violation of national legislation the trial had not even commenced.

The OHCHR also observed regular inconsistences in “engagement of law enforcement in ensuring peaceful assemblies initiated by the ‘profederalism’ movement or its supporters.”

“Generally, ‘pro-unity’ activists prevented ‘profederalism’ activists from exercising their right to freely and peacefully assemble, regardless of the motivation for the rally,” the human right report noted.