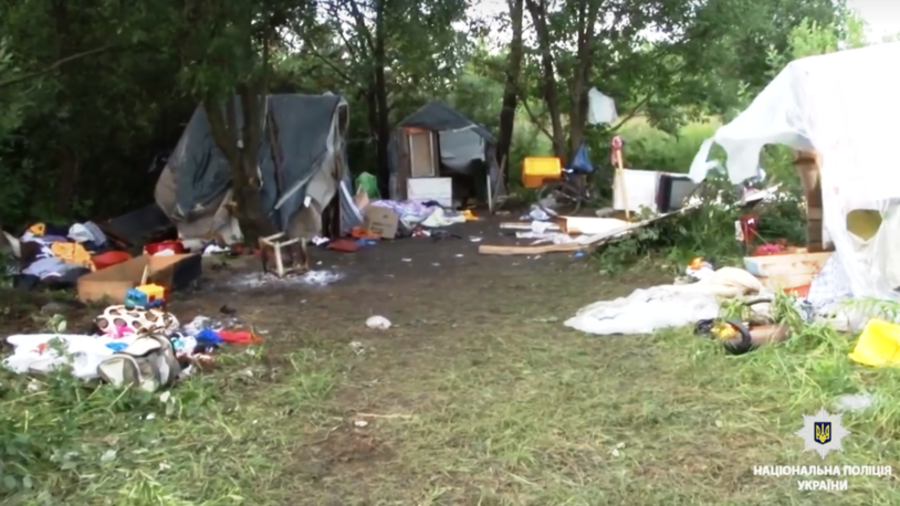 A Roma camp in Lvov, Ukraine © The National Police of Ukraine

A gang with links to far-right extremist groups has torn apart a Roma camp in western Ukraine’s Lvov, killing a 24-year-old man and injuring four people, including a child.

The masked men attacked a Roma camp on the outskirts of Lvov late on Saturday, according to local police. A 24-year-old man died of knife wounds and four more people – a 10-year-old boy, two 19-year-old men and a 30-year-old woman were wounded. The camp reportedly had a total of 14 inhabitants, including 4 children and a pregnant woman, who also came under attack, Hromadske TV channel reported.

The far-right perpetrators reportedly planned the raid in advance, defining the positions of each attacker and their actions. Eight men were detained in connection with the attack, all aged between 16-17 except for the suspected 20-year-old organizer.

The detainees identify themselves as members of the ‘Sober and Evil Youth’ group, which use the symbols of the ultra-right nationalist organization Misanthropic Division, according to senior inspector from the Office for the Observance of Human Rights of the National Police of Ukraine Oksana Sanagurska.

The Misanthropic Division is in turn linked to infamous ultra-nationalist Azov battalion, notorious for its Nazi-like agenda and symbolism, as well as violence in Ukraine’s east.

The camp’s residents now fear further attacks and are planning to return to the Zakarpattia region of Ukraine’s south-west, where they came from.

The deadly attack was condemned by the Council of Europe. A spokesperson tweeted that they are horrified by the killing and hope for a swift and transparent investigation.

Ukrainian police had been ordered to patrol Roma camps, which have been repeatedly targeted by neo-Nazis in recent months. The violence in Lvov was the second such attack in less than three weeks. In early June, members of a far-right group formed by veterans of the Azov Battalion, violently demolished a small Roma camp in Kiev. In April, members of the right-wing extremist group C14 forcibly evictedRoma from a camp in the Ukrainian capital.