Ukrainian neo-Nazis demolish Roma camp in Kiev, brag on FB – and even the US begins to notice 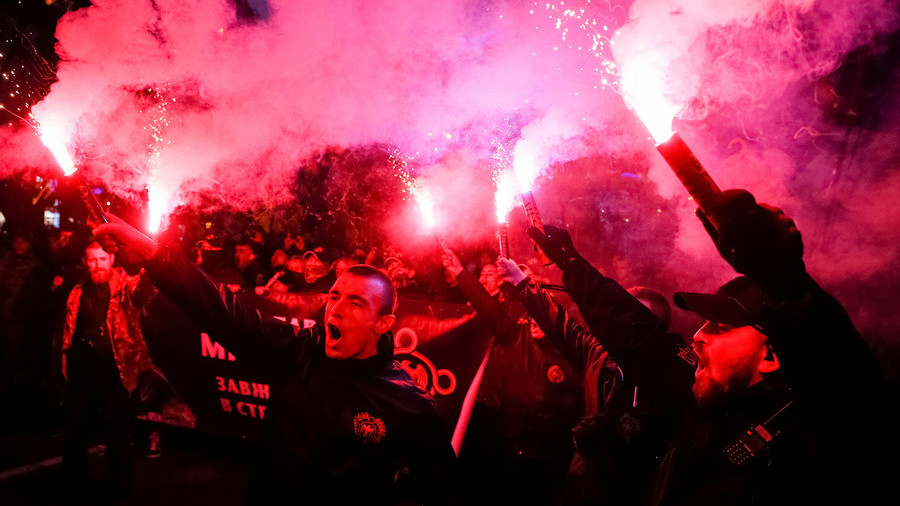 A group of Ukrainian neo-Nazis has forcibly evicted Roma from a camp in Kiev, bragging about the violent pogrom on Facebook. The move was slammed by Amnesty International as Congress voiced concern over Nazism glorification.

The neo-Nazis forced the Roma to flee their camp and then burned some of 15 tents belonging to the Roma, the NGO said. The radicals themselves boasted about their pogrom in a Facebook post and described their actions as “convincing and legal arguments.” They also claimed they “disposed of the litter” left over by the Roma and “safely burnt” their tents, as well as uploaded the photos of the devastated camp to social media.

Footage taken by local activists shows the far-right radicals chasing a group of Roma, which included many children, through the streets of the Ukrainian capital. The video, which was published on YouTube by a local news media outlet, shows the neo-Nazis throwing stones at women and children and using gas canisters against them.

“In the night from April 20 to 21, members of the radical C14 group wreaked havoc in the Roma encampment… in the Goloseevsky district of Kiev,” the Ukrainian office of Amnesty International, the international human rights NGO, said in a statement. The radicals used “gas canisters, bladed weapons and possibly even firearms” in their attack, the statement said, adding that some people, including children, sustained injuries in the incident.

“It is important to understand that anyone could become a target of such attacks: Roma, women, anti-corruption activists, Jews, [members of] the LGBT [community], as well as journalists, artists, students or writers,” Oksana Pokalchuk, the director of the Ukrainian office of Amnesty International, said, commenting on the issue.

Pokalchuk then went on to criticize the Ukrainian authorities for giving the radicals free rein. “No one can now be sure that they will not become the next target of the… radicals, who already got a feeling of impunity,” she said, adding that Ukrainian law enforcement services “remain inactive” in most such cases.

According to the statement, police officers, who arrived at the scene when the radicals already set the camp ablaze, just told the Roma that “everything was burning” and said that they should leave Kiev as soon as possible. Amnesty then called for an “urgent and effective investigation” of the incident, adding that Ukraine has “international obligations” to protect human rights.

Ukrainian authorities have been long turning a blind eye to the actions of various radical groups. In February, members of the same neo-Nazi C14 group stormed the building of the Russian international cultural agency in Kiev. They took a Russian flag from the facility, burned it and spray-painted slogans such as “Death to Russia!” and “Get out!” on the walls inside the building. However, Ukrainian police said at that time that they found “no material damage” resulting from the actions of the radicals.

In January, hundreds of ultranationalist vigilantes marched through Ukraine’s capital, saying that they were ready to use force to impose “Ukrainian order.” They also held a “swearing-in” ceremony in the center of Kiev, during which they vowed to “cleanse”the streets of “the rot like alcoholics and drug addicts.” At that time, police also just looked on.

The C14 is a particularly notorious group of Ukrainian ultranationalist radicals. It was founded back in 2010 and has close ties to the nationalist ‘Svoboda’ (‘Freedom’) party. A US-based Terrorism Research & Analysis Consortium (TRAC) has designated it as a paramilitary group that embraces an ideology of “racism” as well as “urban terrorism.”

In February 2018, a group of C14 radicals vandalized a monument to the Soviet soldiers who fought against the Nazis in the World War Two. The extremists destroyed the inscription, which said: “To those who defeated Nazism.”

The group has been involved in dozens of violent confrontations in Ukraine. Two of its members are suspected by Ukrainian investigators of murdering prominent Ukrainian journalist Oles Buzina in April 2015, the Ukrainian media reports.

The rise of neo-Nazism in Ukraine has recently provoked concerns in Washington. A bipartisan group of 57 US Congress members led by Reps. Ro Khanna (D-California) and David Cicilline (D-Rhode Island) sent an open letter to the acting US Secretary of State John Sullivan, particularly asking him to “exert diplomatic pressure on Ukraine” over what they called “recent incidents of state-sponsored Holocaust denial and anti-Semitism.”

The members of the Congress drew attention to the fact that Ukrainian authorities openly pursue a policy of “glorifying Nazi collaborators, including Stepan Bandera, Roman Shukhevych and the Organization of Ukrainian Nationalists (OUN) as well as the Ukrainian Insurgent Army (UPA),” adding that “these paramilitaries and individuals … bear responsibility for the murder of thousands of Jews, 70,000-100,000 Poles, and other ethnic minorities between 1941 and 1945.”