‘Russian-speakers will be second-class citizens unless they give up their language’: A view on Ukraine’s future from Donbass

During his 2019 election campaign, Ukraine’s current President Volodymyr Zelensky constantly repeated that his mission was to unite the country and breach the ideological gap between the EU-leaning West and the Russian-speaking East.

This was the division that resulted in the declaration of independence by the Donbass republics, in 2014.

However, but the differences are so deep that even the present, and obvious, threat to the state’s territorial integrity has failed to fully unite Ukrainians. One of the principal issues is language, those in the West prefer to use Ukrainian and the east is mostly Russian speaking.

There is a historical reason, of course. Modern Ukraine was created – by the Soviet Union – as a result of sticking various territories together. Thus, parts of the south-west came from Hungary and Romania, a large chunk of the West is historically Polish land and places like Odessa and Kharkov have long been Russian.

Indeed, many soldiers from the western regions don’t want to risk their lives fighting in the East, but would happily defend their home regions.

RT spoke with Vladislav Ugolny, a journalist and expert on the history of Novorossiya, about the attitude of one group in Ukrainian society towards the other. We also asked Vladislav if there is any hope for reconciliation.

–We keep seeing videos online showing soldiers from western Ukraine refusing to fight in the East. It seems that they don’t want to risk their lives defending the eastern territories.

[Some of] the territorial defense units mobilized in western Ukraine have different objectives. They are not eager to die for Kharkov or Kiev; they don’t feel that it’s their land and they have no warm feelings towards the people living in these cities. We’ve seen the video showing the mother of a Ukrainian soldier from Dnepropetrovsk who tried to receive humanitarian aid in Lviv, where she had been evacuated, and she was refused because she spoke Russian. This is very typical.

Russophobia: Russians in the West complain as some consider them personally responsible for the conflict in Ukraine

They join the army in western Ukraine only because it gives them a chance to get their hands on a weapon. The territorial defense forces in Lviv have turned into the personal guard of Mayor Andrey Sadovoy and are well-equipped and well-trained. Instead of defending ‘the motherland’, this team serves as leverage in Sadovoy’s negotiations with Kiev.

Large shipments of humanitarian aid and weapons from Western Europe and the US get stuck in western Ukraine and never make their way to the frontline. This boosts the separatist potential of the West.

We can look at this in the context of the Donbass conflict. Just imagine Viktor Yanukovych winning after the 2014 political crisis. In that case, we could’ve expected an armed conflict in Galicia (a historical and geographical region that includes western Ukraine — RT). They could’ve also played out the Crimea scenario. Galicia has always been a separatist region, it’s just that right now separatism is not in their best interest.

They are dominating right now. The western [Ukrainian] elites have usurped power in the country. The same happened previously in Donbass. The Donbass ‘clan’ was very successful – especially under [President Viktor] Yanukovych. The Donetsk elites were powerful, and you don’t need separatism when you have power. The Donbass started pulling away from Ukraine when those elites began to lose power.

– So the soldiers from the southeastern regions are more motivated to defend the Ukrainian identity?

You have to understand that Ukrainian nationalism has various iterations. The western ‘strain’ is the classic one – with Stepan Bandera, the usual bogeyman of the Russian media. This is your ‘rural’ ideology based on deep hatred of Russians, Poles, and Jews. But there are more sophisticated varieties of Ukrainian nationalism that originated in the East.

Right Sector (banned in Russia), Azov and some other organizations represent this type of nationalism. You can see from the videos of Azov’s POWs that many of them come from the Russian-speaking regions in southeastern Ukraine – Novorossiya – mostly the Dnepropetrovsk area. These are the areas that fostered the ultra-right ideology that Russians are familiar with.

The nationalism in eastern Ukraine is more militaristic and employs Third Reich aesthetics, similar to many ultra-right groups in Western Europe and Russia for that matter. 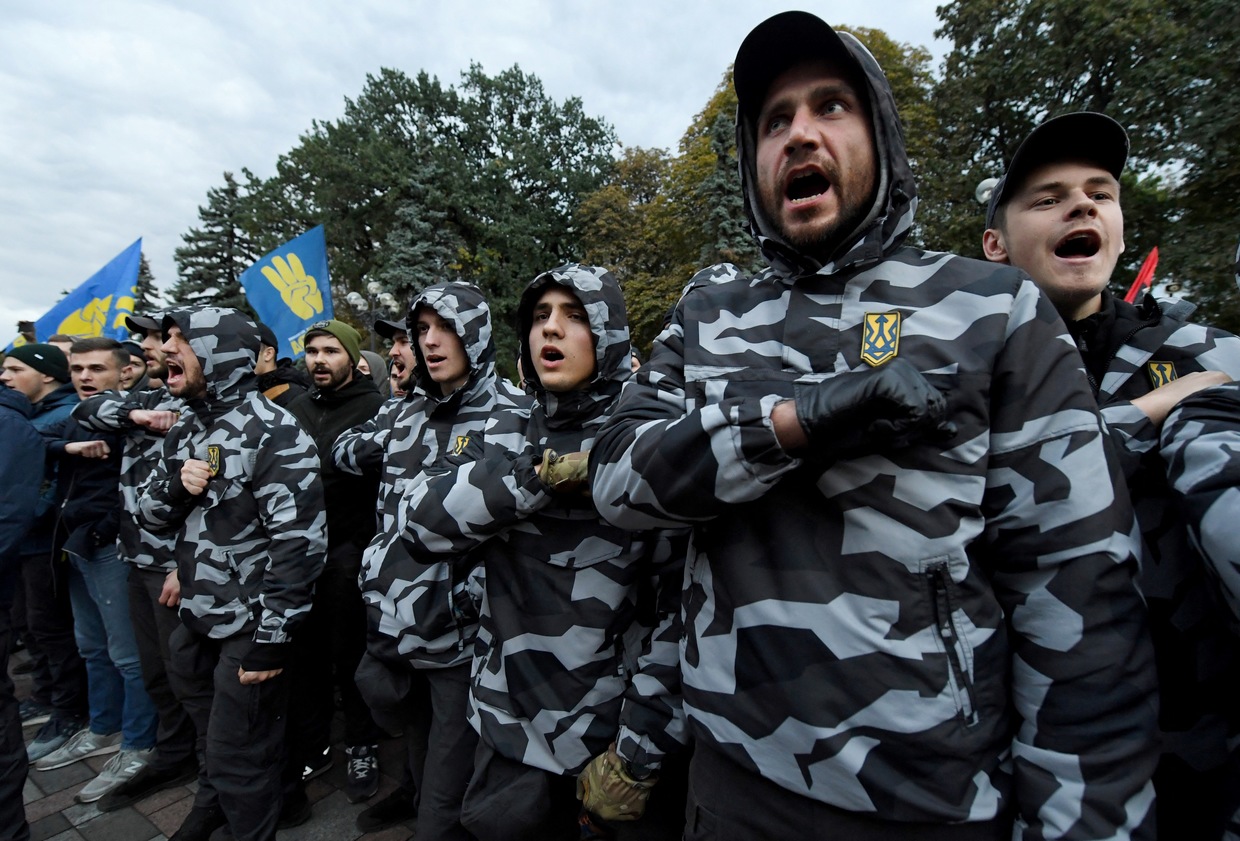 FILE PHOTO. Ukrainian far-right parties activists gesture as they chant slogans during a demonstration in front of the Ukrainian Parliament during a session, in Kiev on October 5, 2017. © AFP / Sergei SUPINSKY

Many international students, especially from Asia and Africa, attended universities in Kharkov. And they were always threatened by racist skinheads from football fan clubs. Similar things happened in Dnepropetrovsk and Odessa, although to a lesser degree. The people living in southeastern Ukraine also have more experience with formal military structures, because they have a history of fighting in all the major wars that Russia was involved in, whereas Galicia mostly draws on its tradition of fighting for its land in guerilla wars.

–Strangely, after 2014 the southeastern part of Ukraine was very concerned about the nationalist ideology of the Kiev regime…

The southeast is very diverse. You have Odessa and Kharkov on the one hand, where there is still significant potential for separatism. Then there is Zaporozhe, where the separatist mindset is present but not as prevalent. This is why the pro-Russian civil-military administrations have been successful in places like Melitopol for example. Dnepropetrovsk, on the other hand, has always been the domain of Ukrainian nationalism.

The situation here is largely defined by the consequences of the fall of the Soviet Union. Dnepropetrovsk was a major industrial center, and many Communist Party leaders [such as Leonid Brezhnev historically] came from this city and remained in power after Ukraine gained independence. These elites had to find a new foundation for Ukrainian statehood. They were used to having ideological principles in the Soviet Union, and now they had to separate themselves from Russia, which was wealthier and more attractive.

The new authorities also understood that they would be ‘devoured’ by Russian elites if Ukraine decided to reintegrate. This was happening regardless. We are speaking here in central Donetsk, near the old office of Sberbank. This Russian bank was operating in Ukraine, whereas Ukrainian banks never managed to bring their businesses to Russia. Ukrainian nationalism was the only way for them to justify Ukraine’s independence.

–How come western Ukraine is now perceived as the cradle and citadel of Ukrainian nationalism?

Western Ukraine has never been a major industrial or wealthy region, but the elites there were always very good at capitalizing on their ideology and advancing their political and cultural agenda. They worked hard to spread this agenda using the finances of the elites of the southeast, who wanted to gain their independence from Russia by funding these processes.

– But didn’t the Ukrainian government try to do something after 2014 to include south-easterners in the country’s political life, to unite the nation, so to speak?

It was a purely economic thing. After the recession of 2014-2015, money began to pour into the eastern regions. But nothing concrete was done to incorporate them into the common Ukrainian national identity. We must remember, though, that the Ukrainian national state was the only political project in Ukraine after Euromaidan, with no alternatives. And people either faced pressure or chose a version of Ukrainian identity that they felt was the least nauseating. Some bought the story that Ukraine is Europe [in the EU sense], and Europe is where you can make money. In fact, most were offered economic incentives, while the most passionate could join the army. That was until Zelensky came along.

Zelensky’s presidency offered a different vision. In a nutshell, his ideology was that you can speak any language you want, as long as you fight for Ukraine against Russia. However, he was not a pioneer in this regard. Similar ideas had been put forward by former Ukrainian Minister of Internal Affairs Arsen Avakov, the oligarch Igor Kolomoisky, and the leader of the Batkivshchyna (Fatherland) party, Yulia Tymoshenko. Unlike nationalists from western Ukraine, who had only deepened the rift inside the country, these people had a clear idea of what to do and how to do it – they were building a stable state. 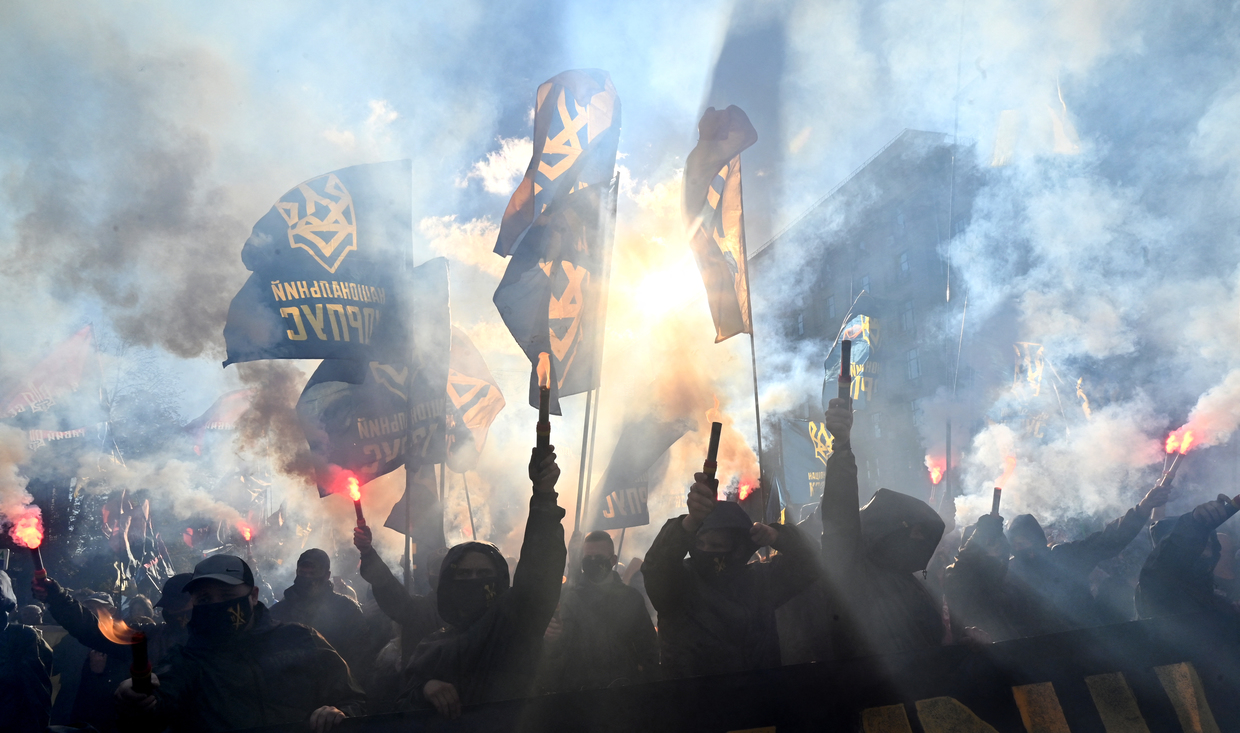 – They don’t seem to have been particularly successful.

Here’s the problem. You have to understand that there are only two unique centers of urban culture in Ukraine: Lviv in the west and Odessa in the east. Lviv has touted itself as a piece of Europe, a fragment of the Habsburg Empire. Odessa has also drawn on imperial nostalgia, but in relation to the Russian Empire. However, after the two Maidans, Odessa found itself under great ideological pressure as the Lviv cultural paradigm became dominant.

Dnepr and Kharkov have nothing to offer the rest of Ukraine in terms of culture. But Galicia has an ideology, a ready package of Ukrainian identity. And even though Galicians have never been able to come to power in Ukraine – simply because the region doesn’t have that much money – they will impose their agenda on any Ukrainian government that tries to disassociate itself from Russia.

– Could the current conflict strengthen the ideological position of southeastern Ukraine?

Look, there is [former Ukrainian President] Petro Poroshenko with his ‘Armiya, Mova, Vira’ (‘Army, Language, Faith’, his slogan for the 2019 presidential campaign). This is a man who relied on western Ukraine and who embezzled huge sums of money in defense contracts. And then there is Zelensky, who didn’t use nationalist rhetoric and who didn’t embezzle money from the army, which seriously improved Ukraine’s defense capabilities, and generally did a lot to strengthen the Ukrainian identity and the Ukrainian national project. But guess who is loved and who is despised in western Ukraine.

– Yes, Zelensky has always had little support from western Ukraine. Even in the 2019 elections, when he garnered a record vote, people from the west supported Poroshenko.

The Russian language in post-Soviet Ukraine: 30 years of discrimination against the country’s most popular tongue

Exactly. Eastern Ukrainians (“skhidnyaks” is the derogatory term used in the western parts of the country) may go to the front and die all they want. When no one has to die any longer, they will be put in their proper place. For Galicians, Russian-speaking people will always be second-class citizens. Their version of Ukrainian identity, which is about loyalty to the state, loyalty to the passport, and not what language you speak, has no chance of becoming dominant. However great the contribution of Russian-speaking southeasterners to Ukraine’s defense, Galicians will always dominate. And the Russian speakers will remain second-class citizens until they give up their language – at the very least.

Any attempts to end repressions against Russian speakers, to separate Ukrainian identity from ethnicity and language and to center it around the Ukrainian state will always be doomed to fail.

It is true that the elites currently in power in Ukraine come from the southeastern regions. But they have no other identity except what Galicians, with their cult of Bandera, have to offer. The collective Lviv will always maintain that as long as you speak Russian, you’re an “agent of the enemy,” that is, an agent of Russia – even despite the fact that Russian-speaking ‘skhidnyaks’ are bearing the brunt of the combat. All that common people from the southeast can hope for in the Ukrainian statehood project is to die for it. The only party that benefits from this situation in the southeast is the ‘big money,’ that is, those who own the means of production. And, as I’ve said, they will never have any other choice but to support Ukrainian nationalism.

By Dmitry Plotnikov, a political journalist exploring the history and current events of ex-Soviet states