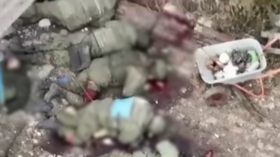 Ukraine’s Prosecutor General has attempted to explain graphic videos depicting the apparent execution of unarmed Russian POWs by Ukrainian servicemen that have been circulating on social media. According to Kiev, Russian soldiers committed“perfidy” and only imitated a surrender, and as such their killing was justified.

Prosecutors stated on Tuesday that a probe into the alleged perfidy, which means to be deceitful, has been launched but added that the incident should solely be blamed on the deceased Russian soldiers.

“According to the results of mass media monitoring, it became known that in the village of Makeevka, Lugansk region, the Russian military, imitating a surrender to the servicemen of the Armed Forces of Ukraine, opened fire on Ukrainian defenders. Such actions are prohibited by international humanitarian law,” the prosecutor’s statement said.

The graphic videos of the POWs’ killing surfaced last week, with the Russian Defense Ministry accusing Ukrainian forces of committing a new war crime, claiming also that the killing of unarmed, surrendered soldiers was a “widespread practice” for Kiev’s troops. Moscow has also vowed to do everything to bring the Ukrainian perpetrators behind the massacre to justice.

“Russia will do everything possible under international mechanisms to draw attention to this crime and to hold responsible, under the law, those involved in it,” Kremlin spokesman Dmitry Peskov said on Monday.

One video of the incident appeared to show unarmed Russian military personnel surrendering to Ukrainian troops and lying in a row on the ground. Another one, captured by a drone, showed the same scene, with troops lying in the same positions, apparently dead from gunshot wounds to their heads.

Another clip of the incident, which did not include audio and was the one that apparently allowed Kiev prosecutors to accuse the massacred POWs of “perfidy,” presumably showed a Russian soldier coming out of a building and shooting at the Ukrainians, while the surrendered personnel were already lying on the ground.