Following the start of the Russian special military operation in Ukraine, western countries pledged to provide billions of dollars in aid for Kiev, but most of it has arrived in the form of weapons to fight Russian troops. However, it would seem that some Ukrainians found a better use for the arms.

Moscow’s warnings to western countries about the dangers of uncontrollably pumping Ukraine with weapons appear to be starting to come true, with some US-supplied arms already surfacing on dark net markets and in international smuggling rings, Sputnik Arabic’s investigation has shown.

Following a search across markets on the dark net – a separate part of the world-wide-web accessible, for example, through Tor browser – Sputnik managed to find an online shop dubbed “Weapons Ukraine” on the THIEF marketplace. True to its name, it’s readily selling weapons.

“Weapons Ukraine” claims to be based in Kiev, has its name in Russian, and boasts about having conducted 32 successful deals confirmed by a guarantor – a middleman provided by the dark website to assure that a client gets their wares and the seller their money. The shop’s owner offers M4S assault rifles courtesy of US arms suppliers for $2,400, well above the Pentagon’s price tag of between $600 and $1,200.

Unlike the Pentagon, “Weapons Ukraine” is ready to sell several hundred of these rifles without bureaucratic complications, such as export licenses, to nearby anyone. In this case, the online shop agreed to sell to Houthi fighters from Yemen hiding behind the username “3ladin_houthi” – a fake identity assumed by the Sputnik Arabic journalist. Upon contacting the trader, whom the journalist addressed in Arabic converted through an online translator into English, the arms dealer asked to switch to Wickr messenger for further communications.

There, the trader confirmed that they were ready to deliver the weapons to Yemen by hiding them in oil barrels. Moreover, the dealer was ready to throw in some extra rifle ammo and frag grenades. The transportation itself would take only ten days, the seller assured. 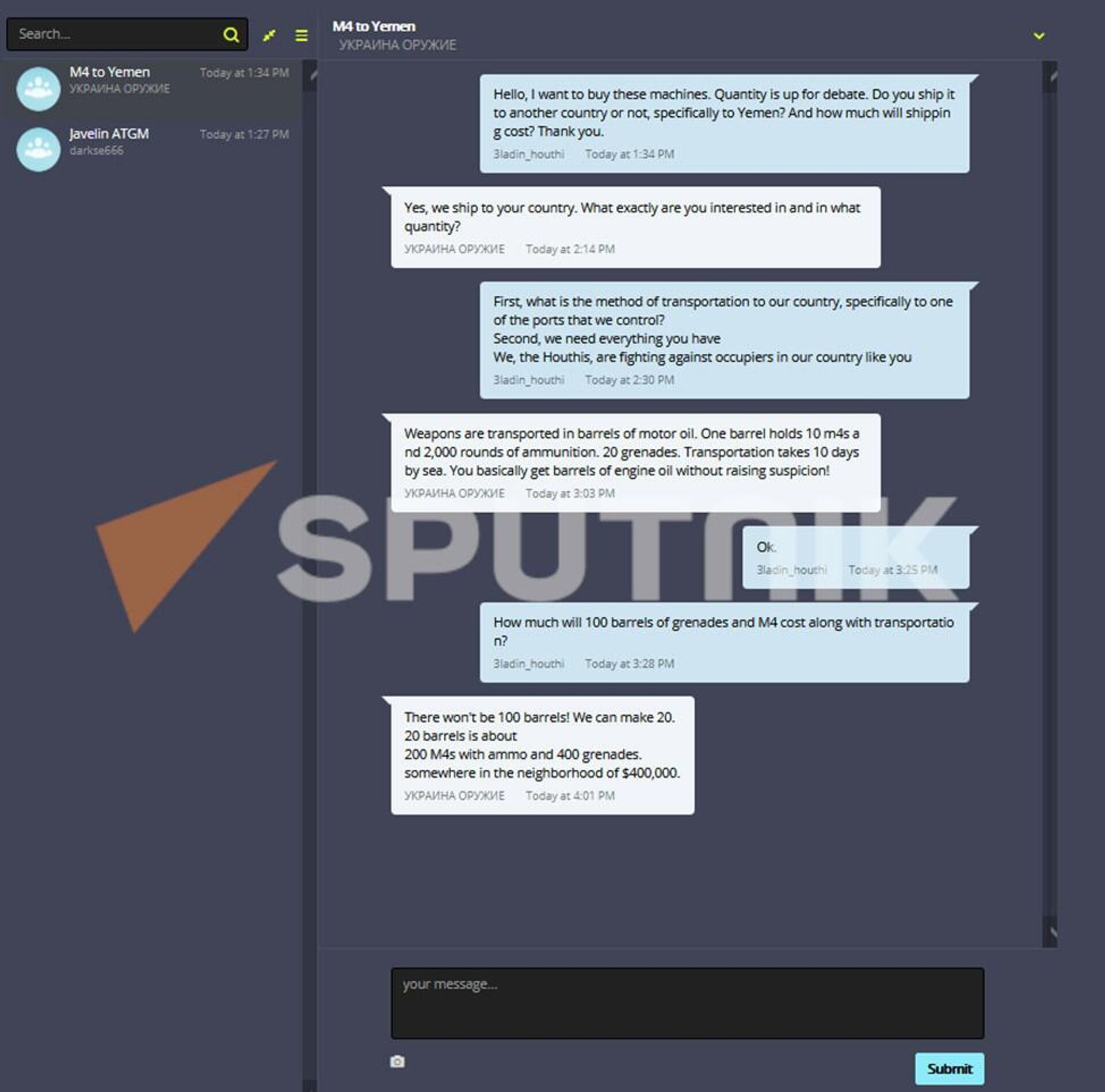 Screenshot of correspondence with “weapons Ukraine”

“Weapons are transported in barrels of motor oil. One barrel holds 10 m4s and 2,000 rounds of ammunition, 20 grenades. Transportation takes 10 days by sea. You basically get barrels of engine oil without raising suspicion,” the trader wrote.

The barrels are shipped on rarely-inspected vessels carrying humanitarian assistance. However, the seller refused to sell as many as 100 barrels of weapons so as not to arise more suspicion. “Weapons Ukraine” and “3ladin_houthi” agreed to ship 20 barrels containing 200 rifles and 400 grenades, with a value of $400,000 for the goods.

Most dark web marketplaces trade illegal goods use cryptocurrencies, since they are difficult or impossible to trace. THIEF is no exception. As “Weapons Ukraine” explained to “3ladin_houthi”, the transaction consists of several steps.

First, the final terms of the deal are discussed and solidified in the presence of a middleman provided by the marketplace. Then, the buyer deposits crypto coins, in this case Monero, to its account on the platform, while the seller ships the goods.

Upon receiving the shipment, the buyer confirms its integrity and quantity and transfers the deposit to the middleman. The latter then sends the money to the seller, withholding 2% for their services. “3ladin_houthi”’s deal would have brought the middleman $8,000 in exchange for guaranteeing that the seller gets the money and that the buyer is not robbed of their share.

‘Allies’ in Poland and Portugal

The full details of the shipment become available only once the deal is agreed upon and the deposit is transferred to the middleman. The buyer gets a tracking number that allows them to know what ship their guns are loaded on to, when and from which port it leaves, and when it arrives to the destination.

Before inking the deal, the seller was only ready to provide general details of the shipment.

“At this point, I don’t know you and you don’t have a deposit. Maybe you are an Interpol agent. I told you in general terms how things work,” the trader said.

“Weapons Ukraine”, however, slipped that the weapons will be loaded onto a ship by their “allies in Poland”. The arms dealer also provided a Russian-written map with a hand-drawn estimate of the ship’s route. According to the map, the transit will depart from a port in Portugal, go around the African continent and arrive in Yemen. The shop’s owner did not elaborate on how the guns are going to make it from Ukraine to Poland and then onto Portugal. 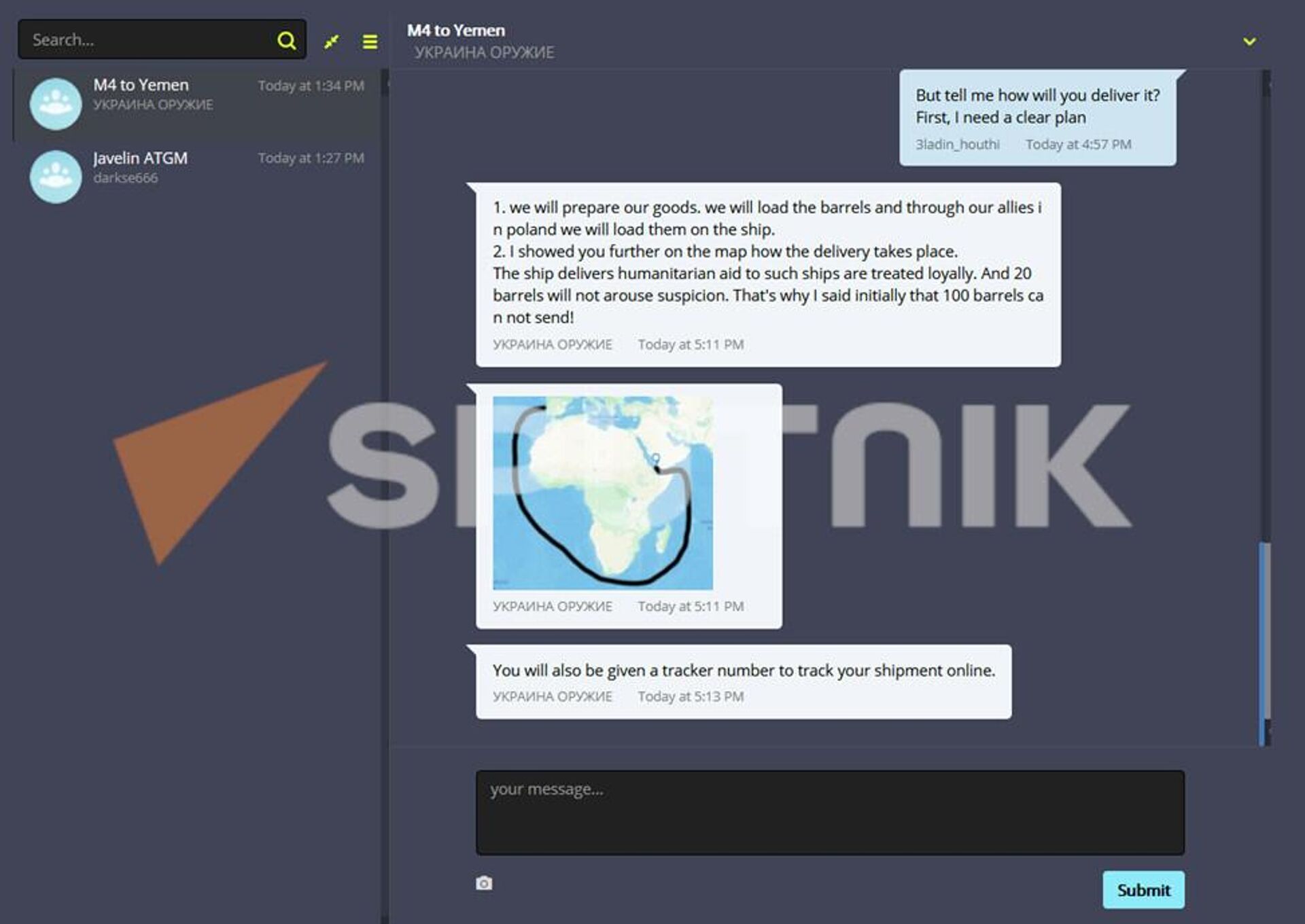 Screenshot of correspondence with “weapons Ukraine”

The rest of the details of the shipment remain a mystery, as the next step in the deal – the marketplace’s verification of the buyer’s account – would blow the ruse.

Still, considering the fact that “Weapons Ukraine” has 32 successful sales of unspecified quantities of weapons, it is safe to assume they had developed a working route for deliveries. Based on the 20-barrel limit, the online shop might have sold as many as 6,400 rifles and 12,800 grenades worldwide. All they need now is more arms to sell – meaning more weapons deliveries from NATO countries.